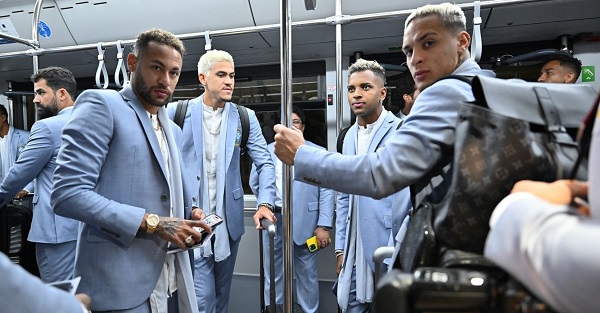 The 32nd and final Participating Member Association at the FIFA World Cup Qatar 2022™ touched down in Doha on Saturday evening, with Brazil arriving at Hamad International Airport shortly before midnight on Saturday.

The South Americans, hunting a record sixth FIFA World Cup crown in Qatar over the coming weeks, were one of four nations to arrive in Doha on Saturday, ensuring that the tournament’s full complement of national teams is now in country ahead of the first-ever FIFA World Cup to be hosted in the Arab world.

Uruguay, Serbia, and Cameroon also jetted into Qatar on Saturday, and alongside Brazil will now commence their official programme of activities in the lead-up to their first group matches of the tournament.

Brazil captain Thiago Silva spoke on the tarmac about the Seleção’s focus to play their best football in Qatar.

“Many people put us on top, but it doesn’t matter if we don’t do what we’re used to doing on the pitch. So, it’s about focussing on our teamwork and our mission. We’re super ready for this competition,” Silva said.

The arrival of Brazil in Qatar caps a significant and extensive period of work for FIFA and the organisers who are responsible for the logistics behind each team’s arrival.


Four teams – Japan, Canada, Switzerland, and Morocco – in fact arrived in Doha twice for this FIFA World Cup, having landed in Qatar before departing for international friendlies in the region, and then returning.

The additional logistics for these four teams meant that Hamad International Airport welcomed the arrival of 32 charter flights with team delegates, while some nations entered Qatar exclusively on commercial flights.

On top of the charter flights, 811 team delegates arrived individually or in smaller groups on 464 commercial flights, with the first team delegate arriving on 30 October.

6,832 pieces of luggage accompanied the teams and their representatives into Qatar, highlighting the scale of the project to welcome teams to the FIFA World Cup.

The peak day of arrivals was on November 18 when 12 teams including the Black Stars of Ghana arrived in Doha before being transferred to their respective Team Base Camps.