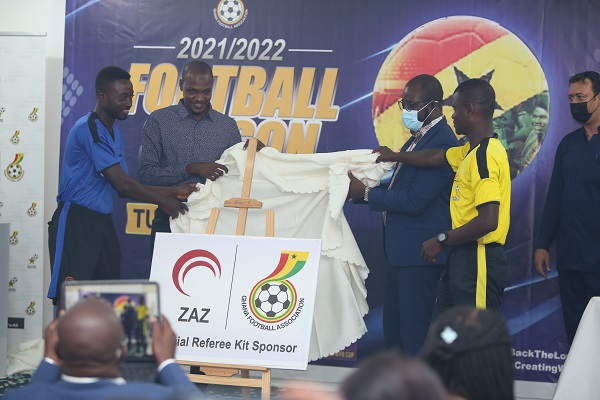 The Ghana Football Association (GFA) President, Edwin Simeon-Okraku, has promised "extraordinary" football competitions which will build on the positives from the previous year, as he launched the 2021/22 football season in Accra on Tuesday with a brand new car up for grabs by the overall best referee, as part of incentives put in place to ensure improved officiating in the elite division.

Yesterday's event, which brought together some of the heavyweights in Ghana football, as well as partners of the FA, saw the football governing body raise the tempo of the flagship Ghana Premier league with the introduction of TEMPO footballs as official match balls of the Premier League, Division One League and the MTN FA Cup competition, while ZAZ will provide referees uniforms to all personnel who officiate in GFA competitions for the next three seasons.

Each club in the Premier League and Division One League will have 10 balls for match days and 20 for training session for the season.

However, the Women's Premier League and Women's FA Cup competitions will use KIPSTA footballs as part of a partnership agreement between the FA and French sportswear and equipment retailer, Decathlon Ghana Limited.

For the FA boss, there were many good reasons for the football community to be expectant and excited about the upcoming season which starts on Friday evening with the opening Premier League fixture to be promoted by Accra Lions and Elmina Sharks at the Accra Sports Stadium.

"Last season was super and I am sure this season will be extraordinary.

"We have come a long way in putting these products together and I would like to call on clubs, referees and all the major stakeholders to come on board for us to organise a successful league season," Mr Simeon-Okraku said.

“For the Premier League, the best referee for the year will take home a car at the end of the season. I am very sure that our referees will be happy.

“The whole idea is to encourage our referees to be competitive and deliver top-notch performances over the course of the season,” he added.

Mrs Akofa Banson, Marketing Manager of StarTimes, the FA's Broadcast Partner, announced that the company would make an investment of $1 million into improved coverage this season, comprising about 150 live matches across competitions and for other productions on Adepa Channel 247 and Max TV channels.