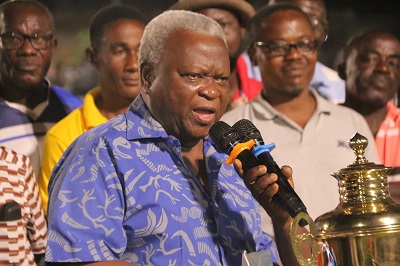 The family of Accra Great Olympic (AGOSU) mourn the passing of Evans Kwabla Teye, one of the main actors in the remarkable story of “the wonder club.”

The late Evans Teye was Executive  Chairman of Accra Great Olympics Football Club from 1975 to 1977.

He presided over the affairs of the wonder club during the period og glory for Olympics. Under his watch Oly won the 1975 FA Cup and won, the Super Champion’s Cup the following year.

In 1977, Evans steered Oly to win the Guinness Gala Competition. The late Evans Teye brought his astute business orientation to bear on his direction and development of the wonder club. The origin of the slogan “AGOSU” stands to his credit as he championed the formation branches of the Olympics family.

We note with pleasure that he inculcated the love of the wonder club in his sons. About 20 years ago, we welcome his son, John, to management of Olympics. John has remained a chip of the old block as he follows the footsteps of the old departed passionate administrator of the wonder club.

We salute you grand warrior as we extend our condolences to your immediate family and the entire Tekperbiawe family of Big Ada. May the God Lord grant you a well deserved rest. FAREWELL, Awetse Kwabia mok3 wo.