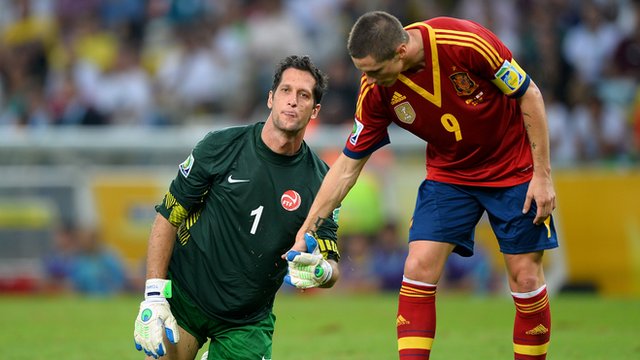 Villa then scored either side of half-time before the Spanish forwards sealed their hat-tricks from crosses.

Juan Mata made it 8-0 and Torres ran in a fourth after missing a penalty before Silva pinched a second late on.

Spain are not assured of their place in the semi-final just yet but they look odds-on to reach the last four after this record win in the competition.

And although the scoreline marked the gulf in class between the two sides, Tahiti once again won new fans with their willingness to get on the scoresheet rather than defend in numbers.

The defeat matched a record loss for the South Pacific islanders, who lost by the same scoreline against New Zealand in 2004, but their endeavour and undoubted class made this occasion far more than a straightforward thumping.

Torres's goal after five minutes, where he beat Roche at his near post after a one-two with Villa, looked like it might signify a goal rush but Tahiti's amateurs played with some distinction for the first half hour against the reigning world and European champions.

Coming after their historic goal in the 6-1 defeat by Nigeria in their Group B opener, Tahiti again employed a high defensive line.

It allowed plenty of gaps in behind coach Eddy Etaeta's defence, but an energetic midfield and poor composure from Spain kept the scoreline more than respectable given the 137 places in Fifa's world ranking between the two sides.

While not exactly struggling, Spain were not at their fluent best to begin with. Given the standard of their opposition, perhaps it was understandable that La Roja could not lift themselves to their usual heights.

With 10 changes to the team that beat Uruguay, Spain finally ended Tahiti's resistance with three goals in eight minutes before half-time.

Villa, who was the only Barcelona player in the starting side, cut in from the left and played in Manchester City's Silva, who slotted past Roche.

Torres then grabbed his second when he collected Mata's through ball, rounded Roche and passed into an empty net and Villa got his first when he controlled Silva's pass and steered in.

Given that they had held out for half an hour, the scoreline at the interval was perhaps harsh on the Tahitians. Yet it was clear that their confidence had been shorn when Villa scored his second four minutes after the break by converting Nacho Monreal's cross.

New Manchester City signing Jesus Navas replaced defender Sergio Ramos at the break, and it was not long before the winger injected some pace into Spain's attack down the right.

Having burst and crossed from the right once, his second attempt set up Torres for his hat-trick after 57 minutes. Villa then matched his team-mate four minutes later after the Barcelona forward capitalised on Roche's mistake following a long through ball.

Chelsea's Mata made it 8-0 when he dribbled through the Tahiti defence to fire in, and although Torres hit the crossbar with a penalty he burst through the defence to seal his fourth.

Tehau had a penalty claim towards the end, but Silva's second rounded off the scoring a minute from time.

It was a competitive game only in name but it marked an experience that Tahiti will not forget and they rightly lapped up the Maracana's acclaim at the final whistle.

Spain manager Vicente Del Bosque: "It was quite humbling to play against them. They were sporting, they played really fairly and every time they got the ball they tried to attack us.

"They were noble opponents. Of course the gap between professional and amateur football is huge but with the respect each team showed, I think football has been strengthened today and not weakened."

Tahiti coach Eddy Etaeta: "Of course we were never going to win, but some of the goals we conceded were a bit naive and we could have done better but we have won a major victory here by winning the hearts of the Brazilian public.

"I think it's fair to say we are better known in Brazil than we are in Tahiti. I like to talk straight and we did not get much support when we left to come to a major competition like this and that was a major frustration. I hope we get some support when we get back."