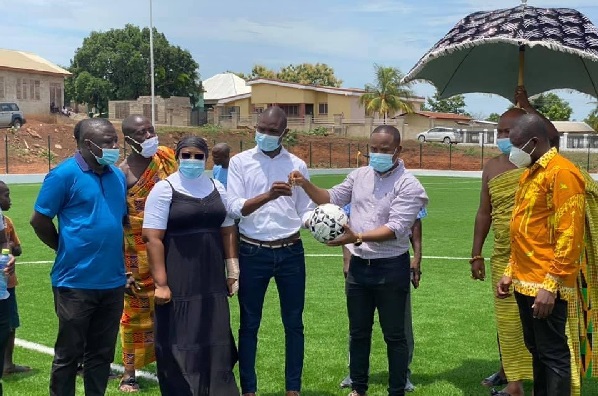 The Ghana National Petroleum Corporation (GNPC) has handed over a newly constructed artificial turf facility at Beposo in the Sekyere Central District of the Ashanti Region to be used by the people.

The facility which was constructed by BLAG Ghana is an 11-a-side football pitch with floodlights which is expected to serve the people of Beposo and its environs.

Dr Eduah explained that the Economic Empowerment Module is highly attainable through the harnessing of sporting talents of which football remains a critical agent.

He thanked the community for their support throughout the construction phase and tasked them to further take good care of the facility to ensure its longevity.

“We have a module that seeks to provide opportunities for the teeming youth of this country and football we believe is part of it,” said Dr Eduah.

“We are grateful to the chiefs and people of this community since the commencement of the project and I urge each and everyone here to ensure the facility is being taken good care of.”

Nana Boamah Mensah, Apagyahene of the Beposo Traditional Council, on behalf of the chief of Beposo, expressed the community’s appreciation for the project; reiterating the several benefits that would come to the youth within the area and beyond.

The Sekyere Central District Chief Executive, Mr Kojo Banahene Bediako thanked GNPC for its partnering role in government’s developmental efforts. He assured of the assembly’s continuous involvement in the maintenance of the facility.

“We are ready to take good care of the facility and that I can assure GNPC. We are grateful for their continuous support to the development of the country and this is just one of them,” Mr Bediako noted.

For his part, the Chief Operating Officer of BLAG Ghana, Mr Eddie Dankwa, who led dignitaries present on an inspection of the facility, called for more of such facilities in various communities to provide opportunities for the youth in sports.

“This is a laudable initiative by GNPC which should be spread across the various communities in the country to help nurture talents for the future,” Mr Dankwa said.