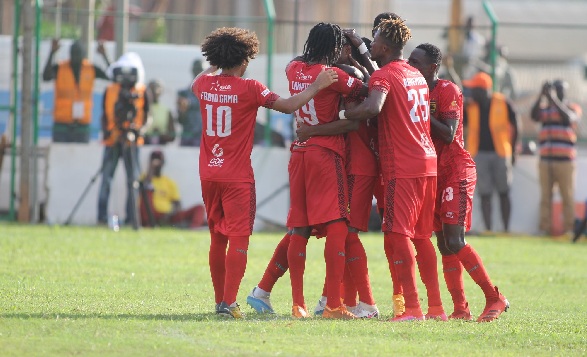 Kumasi Asante Kotoko maintained their winning streak with a second away win in far away Bibiani in the Western North region beating Gold Stars 1-0 at the Duns Park on Friday.

Isaac Oppong sealed the day on 55th minute for the Porcupine Warriors to maintain their hold at the apex of the log on nine points.
Gold Stars, the only team from the area, has literally been appropriated by the home fans pushing for recognition in the Ghana Premier League.
Indeed, by midday, the stadium including the media stance has been full with a nonstop drumming and dancing.
With a fairly new and budding talents, Bibiani Gold Stars gave Kotoko a good run for their money with a first a half pressure to placate their fans.
They pushed from the start of the game for the opener but goalkeeper Razak Abalora was always on hand to save the situation.
And even the momentary incursion the porcupine warriors mounted, they were rightly checked by experienced and former Hearts Oaks defender, Nuhu Suley.
Suley made sure that Christopher Nettey and Fabio Gama were fully checked and impeded their moves each time they were on the offensive, reducing them to their shadows.
But occasional indecision by referee Maxwell Hanson normally against Gold Stars nealy incurred the displeasure of the aggressive home fans.
But  Coach Michael Osei and the technical team were not discouraged urging the boys to push for the opener knowing very well that Kotoko's strength lied in the dying stages of the game.
And true that prediction, Isaac Oppong of Kotoko also known as Sunyani Naymar scored a classic to put his side ahead in the 55th minute.
He chanced on a defensive mishap between Yakubu Dzia Ull Haqq to slot in the opener to silence the otherwise vociferous fans.
The goal changed the chemistry of the game as Kotoko surged to establish their superiority and seniority in the game.
But the "Miners" will not surrender as they battled to redeem their image.
Unfortunately, the Kotoko second half resurgence was just too much for them to contain as Coach Prof Prosper Nartey pushed his chargers to maintain the lead.
Just when the game was becoming more exciting, Referee Hanson tripped and fell injuring himself leading to a temporary hold up.
But he got back to his feet to continue with officiating after being attended to.
And from then no, it was Kotoko stamina and fighting spirit that was at play pushing the home team on back foot.
The home team recovered to mount a search for the equaliser but it was goalkeeper Razak Abalora who saved the day for Kotoko with some me-and-you saves.
Follow @Graphicgh