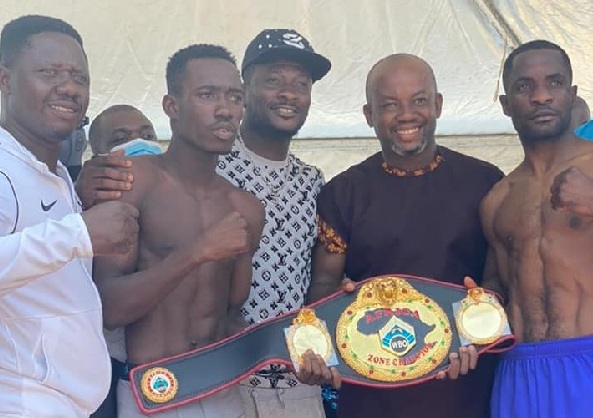 Nataneal, who weighed 125.8 pounds, told the Daily Graphic after yesterday’s weigh-in that he was ready to hand Laryea his maiden career defeat in his homeland.

“I am not intimidated by anyone because I know what I am capable of doing in the ring,” the Namibian said. “Laryea can’t beat me and I don’t know what he can do better than me in the ring.

“All I have to say is that I will carry out successfully by defending my title. There is no way I will return to Namibia without the title,” he assured.

However, Laryea, the national featherweight titlist, also said his opponent must expect something different in the ring against him.

The 21-year-old fighter said he was adequately prepared and ready to face Nataneal, promising to dethrone him to commence his world championship dream.

“This is the biggest opportunity in my young career and I can’t let it pass,” Laryea told Daily Graphic. “He has to be ready for me because I am adequately prepared for anything that he brings into the ring.

“I’m ready to dethrone him because I need this belt to kickstart my world title dreams. It is the perfect opportunity to get to the top and I’m prepared for it”.

In the other pairings, bantamweight prospect, Daniel Gorsh, will slug it out with Emmanuel Laryea, while Jacob Dickson engages Stephen Abbey in a cruiserweight contest.

Joseph Akai Nettey and Thomas Quansah will slug it out in a flyweight contest, Michael Mensah versus Issah Inusah in a light-heavyweight contest, while Tackie Annan and Amadu Seidu face off in a lightweight fight.