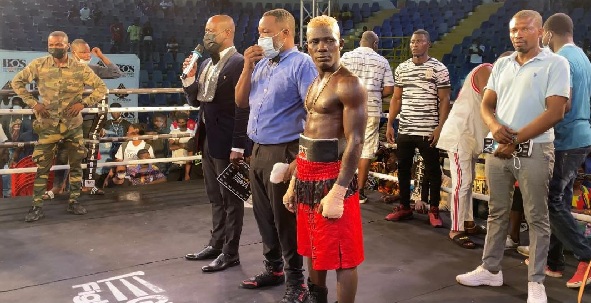 National lightweight champion, Michael ‘One Bullet’ Ansah, says he will focus on challenging for the Commonwealth title rather than offering Sheriff Quaye a fourth fight.

Ansah, who stopped Quaye in five rounds to win their much talked about Independence Day Trilogy fight at the Bukom Boxing Arena in Accra yesterday, ruled out any possibility of fighting his opponent again.

Speaking after delivering his round five knockout promise, Ansah explained that fighting Quaye again would mean no progress in his career hence the decision to opt for a different opponent.

“I don’t think I will fight Quaye again because I have nothing more to prove. I have the bragging rights and that is it.

“I knew I would stop him because  he was not throwing any dangerous punches when the bout started. It was an easy win for me and like I always say, I will beat him anytime and anywhere,” he said.

Meanwhile, Quaye’s camp feels referee Erasmus Quao should have given Quaye a second chance to continue the fight rather than stopping the bout immediately after their fighter was knocked down.

Lawrence Carl Lokko, the trainer of Quaye, blamed referee Quao for ending the night abruptly at a point when Quaye had stood up in a bid to continue the fight.

“I felt he should have given Quaye the chance to continue with the bout because nothing showed he was not okay after the fifth round.

“He ended the bout too early,” said Lokko. “Quaye was dazed but was ready to continue fighting and I feel referee Quao should have exercised patience in stopping the bout.

Ansah started the first four rounds on a poor note with Quaye dominating the pace of the bout. In round one, both fighters came into the ring steadying themselves before opening up.

It was Quaye who landed most of his shots with clean combinations which failed to trouble Ansah.

The second round began with trading of punches from the fighters and that helped Ansah’s game plan. He had come into the ring with the sole focus of stopping Sheriff and that failed to materialise in the opening rounds.

When the bell rang for the third round, Quaye continued with his bright start and landed swift combinations which pushed Ansah away.
Ansah started working on the body of Quaye but that did not trouble the latter. Quaye kept his cool and effectively used his jabs to keep Ansah at bay.

The fight started opening up in round four as both fighters started throwing powerful shots. Quaye continued working on the body of Ansah but his feeble punches could not wear his opponent down.

Just when the round was about to end, Ansah landed a big right hand which sent Quaye to the ropes but he managed to hold on to the end of the round.

In round five, Ansah continued looking for a powerful punch that will trouble Quaye and finally landed one. His powerful combination knocked Quaye down to the excitement of the over 2000 supporters at the Bukom Boxing Arena.

When he got up, he wobbled as referee Owoo effected the mandatory eight count. After failing to stand on his legs, the referee stopped the fight en route to an emphatic fifth round knockout victory for Ansah.

In an interview with the Graphic Sports after the fight, referee Owoo said he ended the bout because Quaye wobbled and failed to raise his hands when he stood up from the knockdown.

He said he effectively did his job by preventing what could have caused death if he had decided to allow Quaye to continue.

“It is normal for fighters to feel bad when they unexpectedly lose the way Sheriff Quaye did,” referee Owoo told the Graphic Sports.

“You could see him wobble when he stood up from the knockdown and he couldn’t stand properly. The law allows him to raise up his hands but they were down and that showed that he was not ready to fight,” he added.

Holy Dogbetor managed a round two knockout victory over Edward Kambassah in two rounds of their featherweight clash while debutant Michael Abban marked his professional career with a second round stoppage win over Benjamin Sackey.