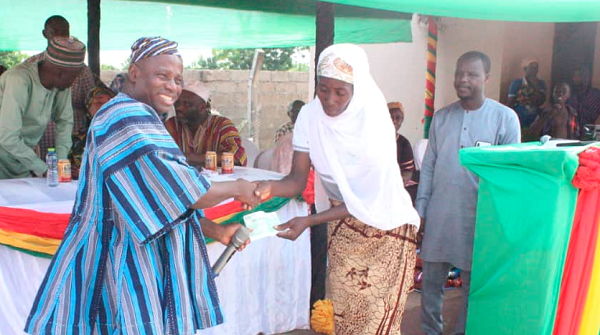 The initiative involves the transfer of monthly stipends to the beneficiaries in the wake of the rising cost of living.

Speaking at the launch of the intervention at Nasia, the Chief Executive of the Company, Saibu Braimah, indicated that the maiden edition of the programme was commencing with 44 beneficiaries.

He said the beneficiaries were selected through a robust process that included a visit to the homes of the applicants to examine their social status, among other considerations, by a team put together by the company and its partners.

He added that the programme was part of several innovations such as the Tamanaa Women Business Challenge, put in place to reward women for their continued contributions to the growth and development of the company, as well as the general economic progress of the country.

"We celebrate these determined women and all women at all places who are self-assured to create value for themselves. These women here have demonstrated, through their life and hard work, that women are capable and self-sustaining and can make a difference when given the right opportunity and resources," he noted.

Established in 2015, Alhaji Braimah indicated that the company started operations with a few women who were into individual small-scale rice processing using traditional methods, adding that through the support of the Export Development and Agricultural Investment Fund (EDAIF), EXIM Bank, Turkish companies and the government, it had since expanded its production.

He said the company currently produces about 300 tonnes of paddy rice per day, with "4,000 farmers indirectly employed by Tamanaa, and over 2,000 of them are women. They receive credit inputs such as fertiliser and seeds and mechanical services every season to support their rice farming."

Alhaji Braimah urged the public to patronise the company's products to sustain its operations and improve on the lives of vulnerable women who had been employed.

“The women have shown that Kayaye is a choice and not a necessity; and that there is a better choice in Tamanaa; back at home.”

“There is no doubt that we have made some significant strides. But our work is far from over. Kayaye is still happening, girls still drop out of school and women still need more empowerment. These and many other reasons explain why we must all keep on working towards a better day for our women,” he stated.

For his part, the North East Regional Minister, Yidana Zakari, lauded the rice processing company for the intervention and pledged the government’s commitment to continue to support it to grow.

"Tamanaa company has created several jobs for many rural women; a look outside at the toll booth right here in Nasia shows a beehive of commercial activities of women selling products of this company. Several more are employed in the process; the achievements of Tamanaa company is highly commendable," he stated.

The Minister-designate for Gender, Children and Social Protection, Lariba Zuweratu Abudu, who is the Member of Parliament for Walewale, admonished the women to continue to work hard towards maintaining the social order in their various households.