Wontumi does not own NPP - Ken Agyapong fumes 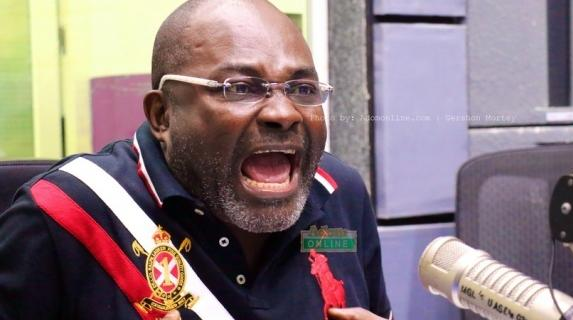 Member of Parliament for Assin Central constituency, Kennedy Ohene Agyapong has counseled the Ashanti Regional Chairman of the New Patriotic Party (NPP), Bernard Antwi Boasiako, popularly known as Chairman Wontumi, to be more reflective of some of his actions which could cause disunity in the party.

He said the decision by Chairman Wontumi to mobilise 15 regional chairmen of the party to openly declare their support for the incumbent General Secretary of the party, John Boadu, ahead of the party's national delegates conference smacks of bad faith in a party that wants to build unity among its rank and file.

For him, all the 15 chairmen who raised their hands in a viral video supporting John Boadu "have all been embarrassed" following the suspected defeat of Mr Boadu in the party's ongoing elections.

Supporters of Justin Kodua, one of John Boadu's challengers, have been jubilating at the Accra Sports Stadium where votes are being tallied for onward declaration.

Mr. Agyapong in an interview with TV3 at the Accra Sports Stadium, venue of the NPP's national delegates conference to elect national officers, said elsewhere, all the chairmen who openly raised their hands to declare support for John Boadu would have resigned.

"Chairman Wontumi should cool down because he doesn't own the party," he said, adding that he, considering the level of disunity in the party, decided not to campaign for any candidate.

The delegates conference is on the theme: "Holding together, working together."

Wontumi does not own NPP - Ken Agyapong fumes https://t.co/tsWLnTLY0V pic.twitter.com/idNtyP2iOv