What Okyenhene said about villagers, witches who insult adults [VIDEO] 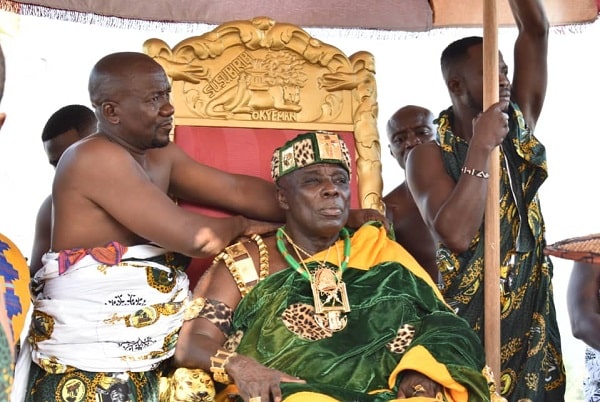 The Okyenhene, Osagyefuo Amoatia Ofori Panin on Sunday addressed the congregation at the St Mark Anglican Church at Kyebi and touched on disrespect in society which has been culminating in insults especially directed at the elderly.

He indicated that it was only those who were not properly trained at home who insult the elderly, especially when they are told to do the right thing.

Supporting the sermon delivered by the priest in church on Sunday, that the youth should stay away from illegal mining and desist from the destruction of the environment, the Okyenhene said the government for instance has introduced free senior high school for the youth, but some are still not interested in going to school but prefer engaging in illegal mining (galamsey) which fetches them around GH¢100 per day.

He insisted that GH¢100 cannot sustain anyone for a proper future planning and so if the youth were interested in their future, it was better for them to stay away from illegal mining and let the government know that the free SHS was very appreciative.

He said it could even get to a point when people with Bachelor’s degree may be doing cleaning jobs, and so insisted the youth should be interested in their education.

Turning attention on insults, he said it was villagers and witches who insult adults.


He said if Ghanaians were to manage our natural resources very well, the country would be better off than other countries and added that some chiefs were also involved in the illegality without showing love towards the country.

He urged them to desist from destroying the environment and the country as leaders.

Attached below is a video showing parts of what the Okyenhene said.