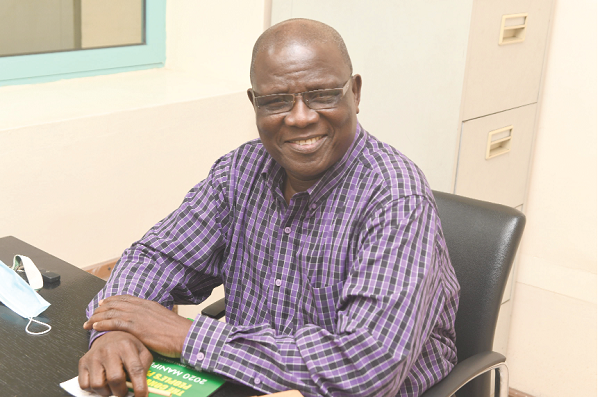 The running mate of the Convention People’s Party (CPP), Professor Emmanuel Bobobee, has urged Ghanaians to give the CPP the mandate to restore the country’s lost glory.

“The CPP does not have any ethnic, regional or religious stronghold. We see the whole country as one constituency, which Ghana’s founding President, Dr Kwame Nkrumah, used to catapult Ghana into an industrious and self-reliant country before his overthrow in 1966,” he said.

Speaking in an interview with the Daily Graphic last Friday, Prof. Bobobee said a return of the CPP to power would mean a restoration of Ghana’s lost glory and the ideals of self-reliance, equity and Pan-Africanism.

That, he explained, would be governed by meritocracy, where you are appointed based on merit due to your qualifications and experience.

He said the CPP was the party to vote for because it can reengineer the country to a prosperous Ghana.

“What the CPP did in nine years under Dr Nkrumah is more than what all the regimes have done since Nkrumah’s overthrow,” he claimed.

He said free education, which was the hallmark of Dr Nkrumah’s nine-year reign, would be restored with emphasis on Science, Technology, English and Mathematics (STEM) to make the youth come up with innovations to propel Ghana’s development.

In line with that, Prof. Bobobee said three per cent of Ghana’s Gross Domestic Product (GDP) would be made available for research to generate new innovations that would propel Ghana into its rightful place in the fourth industrial revolution.

He said all Senor High Schools (SHSs) would also be converted into boarding facilities to serve as an incubator for students of diverse backgrounds to gel and learn from one another.

That, he said, would help breed tolerance and accommodation for one another, enhancing national cohesion in process.

Prof. Bobobee said the CPP industrialisation would be agric-based driven with incentives that would make the youth move into that profession.

He said with appropriate technology, the drudgery associated with agriculture would be eliminated while incentives would encourage many youth to move into agriculture.

He said the emphasis would be on giving priority to the country’s staples such as cereals and root crops.

Apart from the special attention to be paid to staples and roots, he said boards and specialist research institutions would be established to cater for the special needs of those crops such as the Ghana Cocoa Board (COCOBOD) to help turn agriculture into a multi-billion industry.