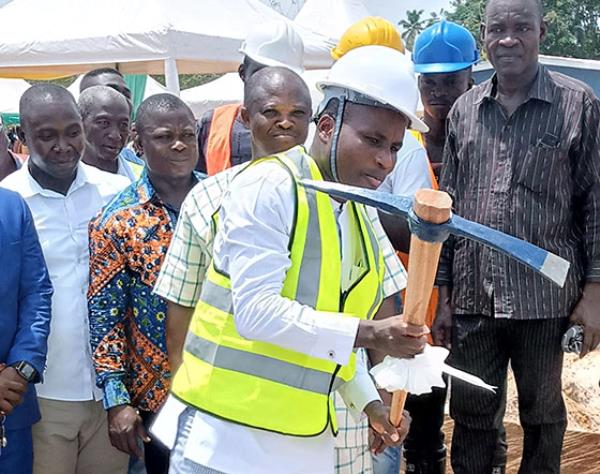 The District Chief Executive of Ellembelle, Mr Kwasi Bonzoh, has given an assurance that the second term of President Nana Addo-Dankwa Akufo-Addo will deliver more to improve the lives of all.

He said after the 2020 general election, for which he was the New Patriotic Party (NPP) parliamentary candidate for the Ellembelle Constituency, was over and the time had come for them to rally behind the government to continue its good works.

The NPP, he said, was always committed to a stable, peaceful, united and democratic nation dedicated to the promotion of the welfare, freedom and prosperity of its citizens, hence the need to support government's efforts.

Speaking to the Daily Graphic at Nkroful, Mr Bonzoh said less than eight months after the President cut the sod for the construction of 28-kilometres of road from Esiama to Nkroful, the food basket of the district, work was progressing steadily.

Nkroful is the district capital and birthplace of Dr Kwame Nkrumah, so the decision to construct the road to his birth place and open the district up was non-negotiable.

From the main junction at Esiama to the various food baskets in the district, works on the road construction in the area is ongoing steadily, coming after last year's declaration of the year of roads by the President.

The progress of the road construction, he said, was a significant achievement since it would provide some relief to many in the district.

“It has reduced travel time and farm produce could get to the market on time and improve access to healthcare in the district and beyond,” he said.

During a working visit to the region in August last year, the President cut the sod for the commencement of work to begin on the construction of roads in the Ellembelle District.

“People thought it was politics, since we were in a political year,” he said and added: “But less than eight months, the people of Ellembelle can attest to the fact that work on the 28km road is progressing and almost completed,” he said.

The road will not only open up the district but also provide easy connections to neighbouring municipal assemblies such as Prestea Huni Valley, Tarkwa Nsuaem, Jomoro and Nzema East.

Mr Bonzoh said the construction works on the road, aside the asphaltic surface, would have two major bridges.

The contractor working on the project with support from the Ghana Highway Authority would replace the two narrow steel bridges with reinforced concrete box culverts to meet the current needs.

“When we talk about tourism, we have one of the biggest tourism products in this country. We have the original birth place of the first president of Ghana, his mother's residence, riverine sites, the mausoleum of Dr Nkrumah and his motel, among others,” he said.

Other benefits the newly constructed asphaltic overlay would bring to the district are investments which will eventually boost tourism in the Ellembelle District.

With the significant contribution of the tourism sector, Mr Bonzoh said the assembly was currently working in collaboration with the Ghana Tourism Authority to renovate and improve all tourist sites to generate revenue for development in the district.

“For the past few years, there has been drastic reduction of tourists in the district due to the bad nature of the road network. The drop in tourists visits to the district resulted in income and job losses among the youth,” he said.