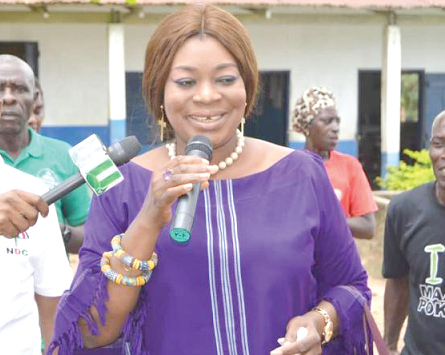 In the run-up to the 2020 general election, one of the constituencies that caught the attention of political watchers in the Central Region was Agona East.

Many people, including supporters of the New Patriotic Party (NPP), had the conviction that the party’s parliamentary candidate, Professor Kwesi Yankah, who was also the Minister of State in-charge of Tertiary Education, had the magic wand to end the dominance of the National Democratic Congress (NDC) in that constituency.

That perception was because of the numerous developmental projects that were being undertaking and other interventions that had been rolled out for the benefit of the people by the ruling NPP government.

But the NDC’s candidate, Mrs Queenstar Maame Pokuah Sawyerr, proved too strong by garnering 23,247 votes against 22,292 by Prof. Yankah to retain her seat.

According to the 2010 population and housing census, the constituency with a total land area of 539.7km has an estimated population of 85,920 and a voter population of 58,750.

The constituency has become a stronghold of the opposition NDC since the NPP had only occupied the seat for eight years since the commencement of the Fourth Republic in 1992 while the NDC has held onto seat for close to 24 years.

As part of the ‘Constituency Watch’ series, Mrs Sawyerr told the Daily Graphic in an interview that due to the deprived nature of the constituency, she was working together with a private partner towards the establishment of a factory to provide direct and indirect jobs to the constituents particularly the youth.

She said her topmost vision was to change the old narrative of the area as a deprived constituency by attracting investors to take advantage of the numerous economic potentials of the constituency.

Mrs Sawyerr said for the constituency to achieve its desired progress and development, conscious efforts must be made towards building the capacity of the youth through education to be able to confront the challenges in the area.

As a remedy, she noted through her share of the MP’s Common Fund, she would continue to provide financial and other assistance to tertiary students as a way of helping the indigenes to acquire higher education to drive the development of the constituency.

“The development of the human capital in the constituency is an important prerequisite towards the forward march of the area,” she stressed, adding that “my focus is to see to the grooming of many youth who will come back to contribute to the constituency’s growth.”

She mentioned that her mobile library project would be re-introduced to enable many schoolchildren in the remote parts of the constituency to sharpen their reading and writing skills to improve basic education in the district.

She said a new initiative to improve the health of the people would soon be launched to augment the health services offered by the various health facilities in the constituency.

Mrs Sawyerr promised to construct more community centres for deprived communities to provide a conducive environment for social gatherings, as well as toilet facilities to improve sanitation in under-served towns and villages.

She said the former First Lady inspired her go into active politics as part of her efforts through the 31st December Women’s Movement.

Mrs Sawyerr said she then entered into active politics in the then Ayawaso Constituency and played various roles in the NDC but was later advised to go back to her constituency to support party activities to which she obliged.

In 2011, she made a bold decision to contest the parliamentary primary in the Agona East Constituency against party stalwart, Mr Kwesi Ahwoi, the then Minister of Agriculture and two other persons.

She beat Mr Ahwoi by three votes after polling 146 votes as against 143 secured by Mr Ahwoi although she was entirely written off in the contest due to Mr Ahwoi’s pedigree in the NDC.

Mrs Sawyerr with tenacity and perseverance went ahead to snatch the seat from Mr John Kwesi Agyabeng who was the MP for the area on the ticket of the NPP in the 2012 general election.