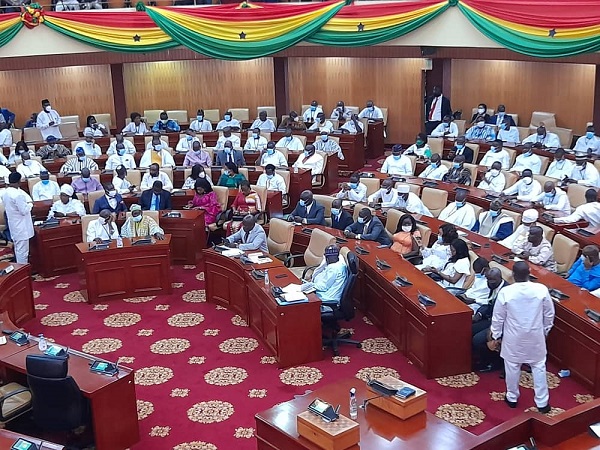 Parliament is gearing up for the election of the Speaker of the Eighth Parliament, however it is unclear how the process will proceed.

The contest is purely a race between the incumbent Speaker, Prof. Aaron Mike Oquaye, nominated by the New Patriotic Party (NPP) and the Second Deputy Speaker, Mr Alban Bagbin, who is being backed by the National Democratic Congress (NDC).

Currently, most of the MPs-elect have already showed up in the Chamber.

Many are wearing white traditional attires and Kente cloths in anticipation of victory that awaits either side.

With no certainty as to who would be elected the next Speaker, MPs-elect from the NDC led by the Minority Leader, Haruna Iddrisu have occupied the right side of the Speaker meant for the majority in the House.

Left with no choice, the NPP who were initially hesitant to take over the Minority bench eventually had to move and occupy the Minority seats.

The MP-elect for Adansi-Asokwa, Mr K. T. Hammond, who was reported to be in London has showed up in the House to bolster the numbers of the NPP MPs.

Also in the House is the MP for Dome-Kwabenya, Sarah Adwoa Safo who was also rumoured to be in the UK.

Interestingly, Mr. James Gyekye Quayson who won the Assin North parliamentary seat in the recent election but who has been prohibited by the High Court in cape Coast from holding himself as the Member of Parliament-elect for the constituency, is also in the house on the grounds that no injunction has been served on him.

MPs-elect on the NDC side hooted at Hohoe MP-elect, John Peter Amewu, shouting 'thief' repeatedly at him after he appeared to attempt to engage Haruna Iddrisu in a conversation. The shouts of 'thief' infuriated Amewu, also Energy Minister who flung his hand at them in protest. Indeed he had to be restrained and escorted away.

Soon after, the MP-elect for Fomena, Andrew Amoako Asiamah entered the chamber in the company of the Deputy Majority Leader, Mr Alexander Markins.

The appearance of the Fomena MP-elect stirred some excitement on the faces of the NPP MPs.

There was further tension as the NDC MP, Cletus Avoka dragged attempted to force Mrs Ursula Owusu-Ekuful, MP-elect for Ablekuma West, insisted on occupying the seat and side of the House she had always occupied during sittings of the 7th Parliament. Avoka wanted her to join her colleagues who now occupied the side reserved for the Minority.

That action provoked Ursula, who pushed her way back and resisted the attempts to be shoved away.