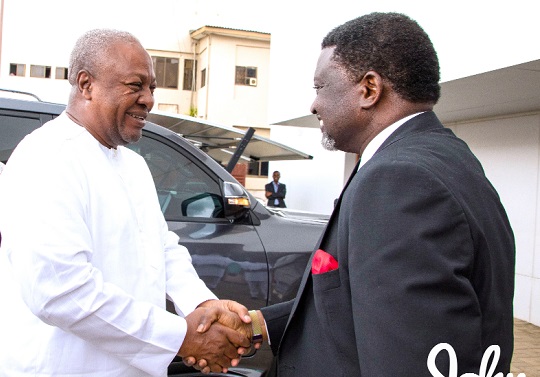 Former President John Mahama has encouraged the founder of the Perez Chapel International, Charles Agyinasare, to speak up on national issues.

He said Archbishop Agyinasare had been a voice that appealed to the moral conscience in the country.

He said his elevation to the status of Archbishop should motivate him to speak more forcefully irrespective of who was in power.

“May God continue to give you divine unction so that you can continue to speak truth to the whole country no matter whose ox is gored,” Mr Mahama said when he joined Archbishop Charles Agyinasare to worship at his Perez Chapel in Accra last Sunday, and to congratulate him on his 60th birthday and also his consecration as Archbishop of the Perez Chapel.

Mr Mahama noted that as a politician and former President, he had remained close to the Archbishop and often sought his counsel when he needed it.

“I have no doubt that considering the Archbishop’s life as a pastor, his exemplary contribution to the growth of the church and to our national development, he has stood firm in his service to the Lord and he has, throughout the years, remained steadfast and focused and I have no doubt that his rise to the level of an Archbishop has been ordained by the good Lord,” Mr Mahama stated.

He congratulated Archbishop Agyinasare on his 60th birthday and his consecration.

“Lordina, the children and myself extend our warm felicitations to you, your family and the church,” he said.

“We wish to express our profound gratitude to you and we take this opportunity to thank you and your congregation for the prayers and support you have given us over the years. You continue to be one voice of our society that will not be silenced or intimidated.”

Mr Mahama showed gratitude to the Archbishop for his support and encouragement to his family and government during his tenure as President.