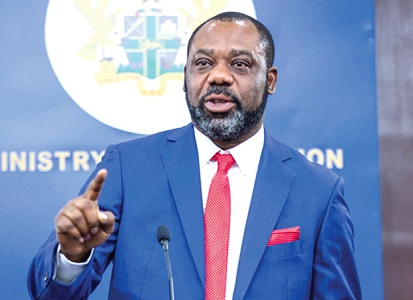 The Minister of Energy, Dr Matthew Opoku Prempeh, has stated that the decision to relocate the Ameri Thermal Power Plant from Takoradi to Kumasi is to ensure stable electricity system in the country.

That decision, he said, became necessary after the Ameri contract elapsed in January 2021 and the plant became fully owned by the Government of Ghana.

Addressing journalists at the Parliament House last Friday, he explained that grid stability had been the weakest link in the country’s transmission system, especially in the Ashanti Region.

He said the region suffered from more interruption than anywhere else in the country, hence the need to relocate the plant to Kumasi after the Volta River Authority (VRA) and GRIDCo approached the government to help stabilise power in the region.

Dr Prempeh, who is also the New Patriotic Party (NPP) Member of Parliament (MP) for Manhyia South, gave this explanation to the media after answering a question on the floor of Parliament on the value of relocating the Ameri plant to Kumasi, following a question by the National Democratic Congress (NDC) MP for Pru East, Dr Kwabena Donkor.

He told Parliament that the contract for the relocation of the power plant that would cost $35million had not been signed off yet.

He, therefore, gave the assurance that the contract would be brought before Parliament for approval since negotiations on the relocation of the plant was ongoing.

Dr Prempeh said the negotiations were being led by VRA on behalf of the government.

He said as part of the contractual agreement, the VRA was going to have 40 of its staff out of the 42 to be trained by Ameri to manage the plant for the next three years after the relocation.

He explained that since the plant arrived in the country five years ago, it had been managed by staff of Ameri, hence the decision to allow them to manage for the transfer of expertise to VRA staff for its management.

Dr Prempeh said VRA did not have the money to relocate the plant and so there was the need to find the money to do so.

"If the issue is the cost, we did invite and found out that the best was to give it out to those operating the plant if they can find the money to relocate it," he stated.

Dr Prempeh said based on that, Ameri was given the deal to look for the $35 million for the relocation of the plant, operate it for three years and train staff of VRA to take over the plant after the three-year period.