Prez Akufo-Addo lacks the political will to fight galamsey - Mahama 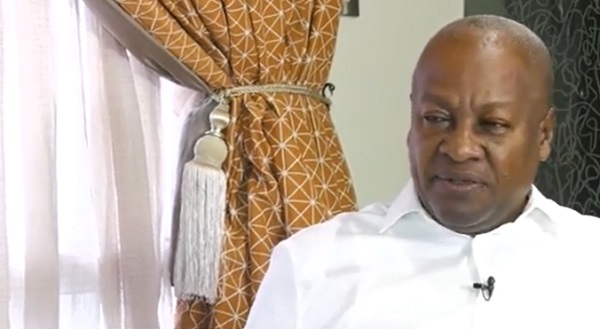 According to Mr Mahama, if President Akufo-Addo were in another jurisdiction he would have resigned over the failed galamsey fight because he put his Presidency on the line on the matter in 2017.

Speaking in a television interview with TV3 on Monday, Mr Mahama said members of the New Patriotic Party including District Chief Executives and other party executives were the persons engaged in the government's Community Mining programme devastating forest reserves, hence the President could not win the fight.

It will be recalled that in 2017, President Akufo-Addo served notice that he was prepared to put his Presidency on the line in his quest to fight illegal mining.

He said many people had said he needed to proceed cautiously, since the people involved were the same people who had voted him into power, and that should he take such a decision against them, they would not vote for him in the next election.

Addressing a two-day workshop on galamsey for traditional leaders drawn from different parts of the country, the President had said: “I have said it in the Cabinet, and perhaps this is the first time I am making this public, that I am prepared to put my Presidency on the line on this matter.”

But Mr Mahama believes after such a pledge and given the state of affairs now in the fight against illegal mining, if President Akufo-Addo was in another jurisdiction, he would have simply resigned.

“Indeed, if we were in some other jurisdiction, he would have resigned by now. By his word, he put his presidency on the line, because now his own people have been found to be the ones engaged” in it.

"It makes very nice verbiage when you talk about it and express a will to do something, actions speak louder than words," he said.

He further accused the government of knowing the individuals behind illegal gold mining in the country.