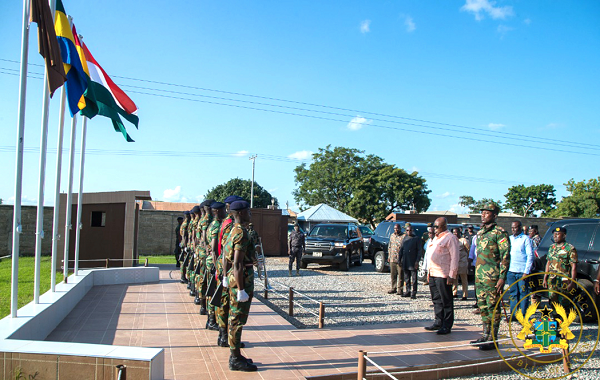 President Akufo-Addo inspecting a guard of honour on his arrival at the Wa Airport
30.5k Shares

President Nana Addo Dankwa Akufo-Addo has received a rousing welcome at Wa in the Upper West Region from government officials, heads of departments, and the New Patriotic Party (NPP) members.

The President arrived last Sunday at the Wa Airport to begin a three-day working visit to the region to inaugurate and inspect government projects as well as interact with the chiefs and people of the area.

The Minister for the Interior, Ambrose Dery, was the head of the party that welcomed President Akufo-Addo to the region. The other members of the welcoming party included the Regional Chairman of the New Patriotic Party (NPP), SB Kangberee, Regional Minister, Hafiz Bin Salih. The rest are the various municipal/district chief executives and NPP executives and party faithful.

At the Wa Airport an enthusiastic crowd met the President amid drumming and dancing with music by the NPP Regimental Youth Band who had been at the airport several hours before the President’s arrival.

“Upper West women say thank you for the ultra-modern Wa Market”, among others.

The President, shortly after his arrival, visited the 10th Mechanised Battalion (Wa Military Barracks) where he interacted with personnel from the security agencies in the region.

The Upper West Regional Secretary of the NPP, Dr Tanko Daniel Dawda, said the massive welcome for the President was an indication of the people’s love for him and the party.

“Because people love our party so much in this region and people are ready to work with us, you could see that there was a mass crowd of people at the airport and even in town to welcome His Excellency to Wa. This is what we were all looking for and God, being so good, has done it for us. We are grateful”, he said.

Dr Dawda expressed confidence that the work the President Akufo-Addo-led government had executed so far in the region and across the country would ensure the party was retained in power in 2024.