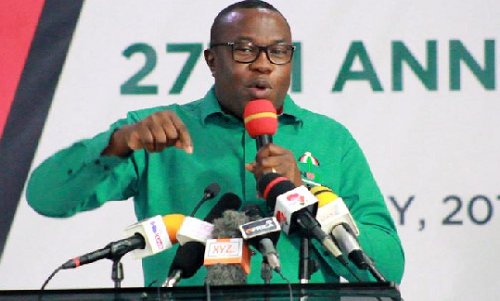 The National Chairman of the National Democratic Congress (NDC), Mr Samuel Ofosu Ampofo, has asked members of the party to prepare to wrest power from the New Patriotic Party (NPP) in 2024.

He has, therefore, asked party faithful not to be dejected by the loss of the elections in 2020 but to walk with their heads high as the party prepares to win back power in the next general election.

He was speaking in a radio interview in Kumasi as part of the ‘thank you’ tour by former President John Dramani Mahama.

“We are here to thank all our party executive members from the constituency to the branch level, including all the serial callers who worked hard to garner the votes attained in 2020.

“We did not lose in the elections because our parliamentary seats shot up from 106 to 130; we were expecting about 140 seats but we will ensure we work hard to wrest power come 2024,” Mr Ofosu Ampofo noted.

For his part, the party’s General Secretary, Mr Johnson Asiedu Nketia, insisted the NDC would leave nothing to chance in its quest to win the 2024 general election.

In line with that, he said the party would ensure that the right things were done at the polling and collation centres.

According to him, the NDC had learnt lessons the hardest way and thus devised better strategies going into the next elections.

“We have learnt our lessons from the previous elections. We have new tactics to use in the 2024 election. That is why we said the elections would be a ‘do and die’ affair at the polling station,” Mr Asiedu Nketia stated.