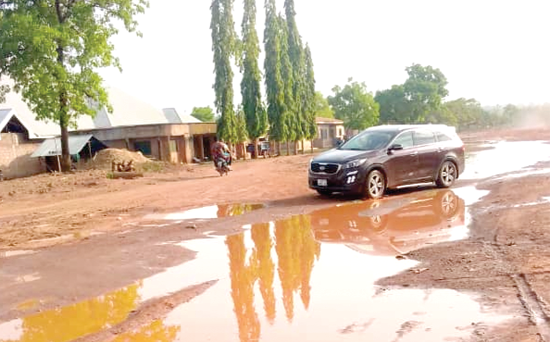 Located within the Bono Region, the Tain Constituency, which had been a safe seat for the National Democratic Congress (NDC) until the New Patriotic Party (NPP) snatched it in 2016, was carved out of the Wenchi Constituency in 2004.

However, the NDC’s candidate in the 2020 election, Mr Sulemana Adamu, reclaimed the seat with a margin of 2,800 votes.

The constituency is agrarian, with most of the residents involved in food crop farming.

The constituency shares borders with Berekum, Sunyani West, Jaman North, Banda and Wenchi, as well as the Bole District in the Savannah Region.

In an interview with the Daily Graphic as part of its Constituency Watch series, Mr Adamu said he had categorised all the needs of the constituents into several thematic areas and when put together, the poor road network stood out as the major challenge of the constituency.

“The roads in the whole constituency are very terrible. In some towns, when people are travelling, they have to take extra clothes so that they change when they get to their destination. This is because the road is so dusty and rugged.

According to him, if the road networks in Tain were fixed, “we are going to increase the national food basket”.

To help address the poor road network, the Member of Parliament (MP) said he, together with some other MPs on that block, intended to send emissaries to the government to start the advocacy from that level.

“The roads cannot be done by the MP alone or individuals, so we are still trying to get the government to step in. It will be in the interest of the country if that enclave is fixed. In a very short term, if the government fixes it, it will help cashew overtake cocoa in the next decade.

Mr Adamu also noted that access to potable water was a huge challenge for the constituents.

“We will need a minimum of 50 boreholes to give the constituents the minimum supply of water to survive. Majority of the constituents now depend on streams which dry up when the dry season sets in,” he stated.

He said access to education was also a challenge as children had to walk long distances before getting the opportunity to be educated, something which discouraged most of them.

“I have started discussions with the Ghana Education Service to see what can be done about that. I know the GETFund resources may not be enough but I will channel a lot of that into getting them the basic level of education,” he noted.

Mr Adamu, who is currently pursuing a Doctor of Philosophy (PhD) in Public Health, started his political life as an Assembly Member and later became the District Chief Executive (DCE) of the Tain District.

He also served as the constituency secretary for the NDC in Tain between 2010 and 2018 and won the NDC primaries to represent the constituency in the 2020 parliamentary election on his first attempt.