Politics about development, not religion — NPP But NDC reacts 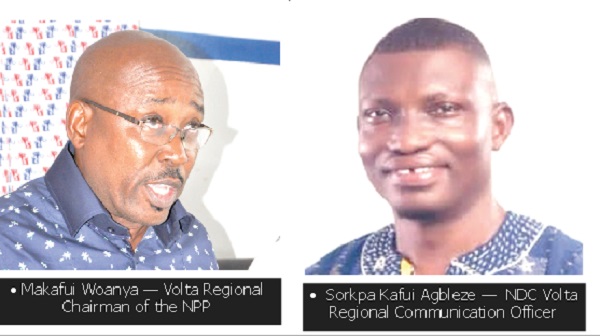 The New Patriotic Party (NPP) Volta Regional Chairman, Makafui Woanya, has stated that the party would depend on the good works it has done in the region to win the hearts and minds of the people.

Dismissing call on the people of the region by the General Secretary of the National Democratic Congress (NDC), Fifi Kwetey, to revere the the NDC and consider it as their religion, Mr Woanya said politics was about development and improvement in the lives of the people and not a religion.

However, the NDC has reacted to Mr Woanya’s statement and said the people of the region would have been happier if he had touched on the rising prices of goods and services in the region and the entire country.

A statement, issued and signed by the Volta Regional Communication Officer of the NDC, Sorkpa Kafui Agbleze, last Saturday, said the party was not pushing any tribal agenda as alleged by Mr Woanya who was rather uncomfortable about the unshaken and soaring support of the NDC in the Volta Region.

Mr Woanya was speaking at a news conference in Ho last Thursday (January 19) to react to the appeal made by Mr Kwetey to the people of the region to hold onto the NDC as their religion, at the opening of a three-day retreat of NDC regional executives in Dzodze on January 10, this year.

He said there was no reason whatsoever for the people of the region to continue singing “hallelujah chorus” for the NDC, because they were now more interested in identifying with policies and projects which affected their lives directly.

The people of the region, he said, could not adhere to any blind faith and religious attachment to a certain political party which was not committed to their welfare.

According to Mr Woanya, the NPP had demonstrated its commitment to the development of the region with monumental achievements in various sectors, unlike the NDC.

In the area of health, for instance, existing health facilities had been improved and refurbished.

He cited the inauguration of the Weta District Hospital in the Ketu North Constituency, the progress of the Agenda 111 hospital projects in the Afadzato South, Ho West, South Dayi, Agotime Ziope, Akatsi North, Akatsi South, Adaklu, and Anloga districts and municipalities as testimonies of the NPP’s commitment to development in the region.

The NDC, in their statement, said the people of the region expected the NPP Regional Chairman to talk about the promise made by the finance minister to commit funds towards the continuation of the sea defence project along the Anlo, Keta and Ketu South lines to forestall the ravaging impact of the constantly-invading tidal waves.

It maintained that it was obvious Mr Woanya, like many in the NPP, was uncomfortable and insecure about the massive attention and goodwill being enjoyed by the NDC; which was well-positioned to not only recapture the Hohoe parliamentary seat but to also, decisively, win the 2024 general election.