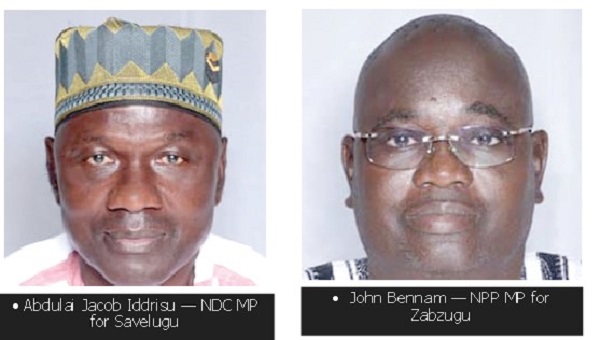 The Tamale High Court on Friday affirmed the declaration of the National Democratic Congress (NDC) Member of Parliament (MP) for Savelugu, Abdulai Jacob Iddrisu and the New Patriotic Party (NPP) MP for Zabzugu, John Bennam, as the winners of the 2020 parliamentary elections.

In a separate ruling, the court presided over by Justice Daniel Obeng held that the petitioners Abdul-Samed Gunu, who was the NPP candidate for the election, and Alhassan Umar, the NDC candidate, failed to prove their cases.

The court awarded a cost of GH¢ 120,000 to the MPs of the two constituencies and the Electoral Commission (EC).

The NPP parliamentary candidate filed a petition at the high court challenging the validity of the election of Abdulai Jacob Iddrisu as MP pursuant to the parliamentary elections held on December 7, 2020.

Per the results declared by the EC in the parliamentary elections, Mr Gunu polled 19,478 votes while Alhaji Iddrisu had 19,577 votes.

In his petition, Mr Gunu claimed that the election of the NDC candidate as MP for the Savelugu constituency was invalid, owing to widespread malpractices and irregularities, which affected the outcome of the election.

The petitioner contended that there were irregularities at a number of polling stations, which substantially and materially affected the results of the election as declared by the EC in favour of the respondent.

In his ruling, Justice Obeng said the petitioner failed to prove the claims.

He said the allegations raised by the petitioner were just administrative errors and did not affect the outcome of the elections.

He said the court, therefore, deemed the respondent as duly elected and ordered the registrar of the court to serve the EC with the certification of the result of the election.

Similarly, the NDC 2020 parliamentary candidate for Zabzugu filed a petition against the NPP MP for the constituency, citing election irregularities.

The court accordingly dismissed the petition after the petitioner failed to prove his case, and awarded a cost of GH¢ 60,000 to the EC and Mr Jabaah.

Both the NDC and the NPP have expressed satisfaction with the outcome of the rulings.

The Northern Regional Secretary of the NDC, Mohammed Abdul-Salam, said the party was satisfied with the outcome of the rulings and that it would not appeal the Zabzugu constituency ruling.

A Deputy General Secretary of the NPP, Haruna Mohammed, urged state prosecutors to pursue another criminal case involving the Savelugu MP where unlicensed guns were allegedly found in his possessions during the 2020 general election.

There was heavy security at the precincts of the Tamale High Court to ensure peace.

The atmosphere was charged and some executives and supporters of both the NDC and the NPP were anxiously waiting at the court precincts for the outcome of the cases.