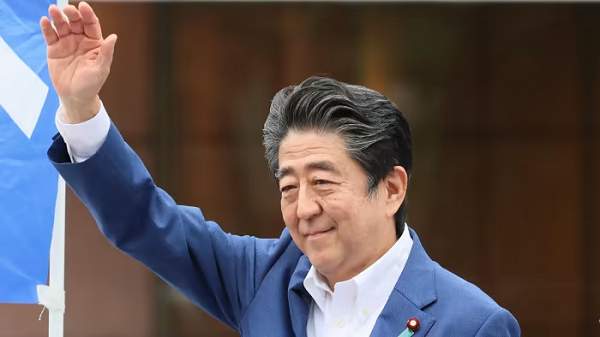 The demise of Japanese longest-serving Prime Minister, Shinzo Abe, has sent shock waves across the globe with the pouring in of tributes by world leaders.

He was campaigning for a parliamentary election on Thursday when he was shot in the chest which led to his death early yesterday.

Abe, 67, was pronounced dead around five and a half hours after the shooting in the city of Nara, Japan, while Police arrested a 41-year-old man and said the weapon was a homemade gun.

The German Chancellor, tweeted: “Even in these difficult hours, we stand close to Japan,” and Ukrainian President wrote: “This heinous act of violence has no excuse”.

“The President of the United States, Joe Biden, said “United States stands with Japan in this moment of grief. I send my deepest condolences to his family”.

Former President Barack Obama shared his shock and sadness at the news on Twitter, writing that his “friend and long-time partner” Abe “was devoted to both the country he served and the extraordinary alliance between the United States and Japan”.

French President Emmanuel Macron stated that he was also “Deeply shocked by the heinous attack that Shinzo Abe suffered,” on Twitter on Friday. “Thoughts to the family and loved ones of a great Prime Minister. France stands alongside the Japanese people,” Macron said.

Outgoing British Prime Minister Boris Johnson – who announced his forthcoming resignation from 10 Downing Street Thursday – said in a tweet that he was, “Utterly appalled and saddened to hear about the despicable attack on Shinzo Abe. My thoughts are with his family and loved ones”.

Abe served two terms as Prime Minister, stepping down in 2020 citing ill health. But he remained a dominant presence over the ruling Liberal Democratic Party (LDP), controlling one of its major factions.

Kishida, who won the premiership with Abe’s backing, said the LDP would continue election campaigning on Saturday to demonstrate its resolve to “never give in to violence”, and to defend a “free and fair election at all cost”.

The lawmaker first became premier in 2006, lasting just a year before returning for a rare second stint in 2012 pledging to revive a stagnant economy, loosen the limits of a post-World War Two pacifist constitution and restore traditional values.

Abe hailed from a wealthy political family that included a foreign minister father and a great uncle who served as premier. But when it came to many policies, his grandfather, the late Prime Minister Nobusuke Kishi, seems to have mattered most.

Kishi was a wartime cabinet minister imprisoned but never tried as a war criminal after World War Two. He served as prime minister from 1957 to 1960, resigning due to public furore over a renegotiated US-Japan security pact.

Five years old at the time, Abe famously heard the sound of clashes between police and leftist crowds protesting the pact outside parliament as he played on his grandfather’s lap.

Kishi tried unsuccessfully to revise Japan’s US-drafted 1947 constitution to become an equal security partner with the United States and adopt a more assertive diplomacy - issues central to Abe’s own agenda.

The longest-serving leader of modern Japan, Former Prime Minister Shinzo Abe, who sought to lift the economy out of chronic deflation with his bold “Abenomics” policies, beefed up the military and countered China’s growing clout.

It is the first killing of a sitting or former Japanese leader since a 1936 coup attempt, when several figures including two ex-premiers were assassinated.

Post-war Japan prides itself on its orderly and open democracy. Senior Japanese politicians are accompanied by armed security agents but often get close to the public, especially during political campaigns when they make roadside speeches and shake hands with passersby.

In 2007, the mayor of Nagasaki was shot and killed by a yakuza gangster. The head of the Japan Socialist Party was assassinated during a speech in 1960 by a right-wing youth with a samurai short sword. A few other prominent politicians have been attacked but not injured.