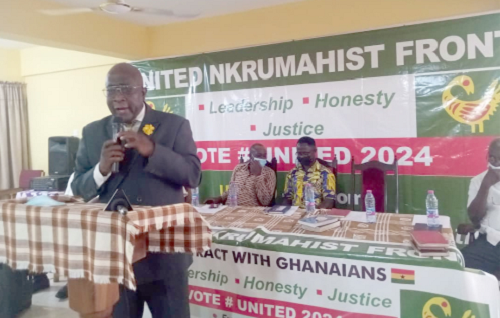 The 2020 Vice-Presidential Candidate of the People’s National Convention (PNC), Pastor Dr Divine Ayivor has reiterated the need for all members of splinter Nkrumaist parties and groupings to come together to form a force that will liberate Ghanaians from bad governance in the country.

According to him, it was only a united Nkrumaist party that can put the country on the right path of progressive development.

Speaking at the Volta regional public interaction of the United Nkrumaists Front (UNF) in Ho yesterday, he said both the two dominant parties, the New Patriotic Party (NPP) and National Democratic Congress (NDC) had ridden on the back of members of the Nkrumaist party to build their parties.

The forum was on the theme, ‘Uniting without verity is no better than conspiracy’.

Dr Ayivor noted that the ideology of Nkrumah was dying because of the existence of splinter groups and the abysmal performance in elections.

“We cannot continue to get ‘lotto’ results during an election and expect to win power,” he stated.

He noted that the Nkrumaist parties had not been able to make impact in rescuing the country because of greedy leadership who sold the parties to the two biggest political parties, leaving members to struggle in vain.

The secretary of the UNF, Mr Michael Nketiah, said the UNF was pre-occupied with uniting Nkrumaists under one political entity to contest and win in future elections.

He said the UNF had a vision to support Ghanaians to achieve their highest potential through quality education with science, creative arts, technology and patriotism at the foundation.

The administrator of the Convention People’s Party (CPP), Nii Adjetey Sowah, disclosed that the leadership of the CPP and other leaders of the Nkrumaist tradition have held series of meetings with a focus on the name, symbol and signing of a memorandum of understanding for a united Nkrumaist party.

The South Dayi Chairman of the Progressive People’s Party (PPP), Mr Explo Nani-Kofi said unity was possible and that his constituency had set the pace by bringing four parties together in presenting one parliamentary candidate for the 2020 election, leading to a good performance.

He urged all other constituencies to follow the example to make the unity dream a reality. ‘We can come together and choose quality leaders that will represent us and bring us victory’.

The South Dayi regional secretary of the Ghana Union Movement (GUM), Mr Charles Dela Egbadewoe, said the move was to liberate Ghanaians and ,therefore, all must embrace the UNF for the progressive development of the country.