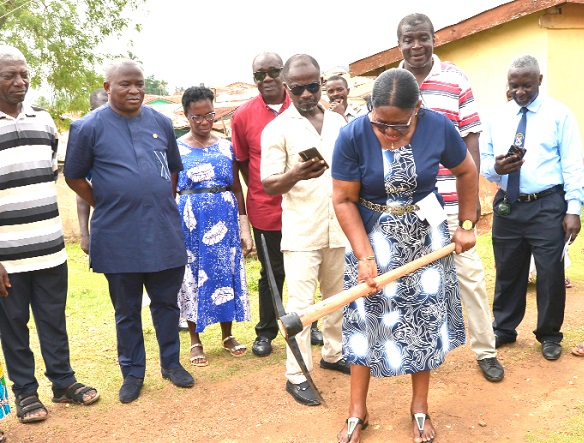 Victoria Adu, Birim Central Municipal Chief Executive, cutting the sod for the project at Oda Presbyterian cluster of schools. Among those looking on are Alexander Akwasi Acquah (2nd from left), MP for Oda. Follow @Graphicgh

The New Patriotic Party (NPP) Member of Parliament for Oda, Alexander Akwasi Acquah, has initiated the construction of educational facilities for three schools at Akyem Oda.

Speaking at the sod cutting ceremony, Mr Acquah recalled that following a rainstorm that hit Oda on April 5, 2021, a number of structures, including school blocks, were destroyed.

He explained that he, together with the Municipal Chief Executive for Birim Central, Ms Victoria Adu, and the Senior Presidential Advisor, Mr Yaw Osafo-Maafo, got the support of the Ghana Education Trust Fund (GETFUND) and other organisations to re-roof the schools.

Mr Acquah, however, said during his tour of the schools, he identified other needs hence the provision of the facilities for those educational institutions.

He said all the projects had been awarded to local contractors who were expected to complete the projects within three months.

For her part, Ms Adu, who cut the sod for the commencement of work, commended Mr Acquah for his quick response in solving some of the challenges in the municipality.

Ms Adu said she had been a former headteacher for the Oda Presbyterian cluster of schools for 18 years and realised that the place of convenience serving more than 1,000 pupils and many teachers was problematic.

She called on the contractors working on the three projects not only to complete them on schedule, but also execute them to meet the contract specification.