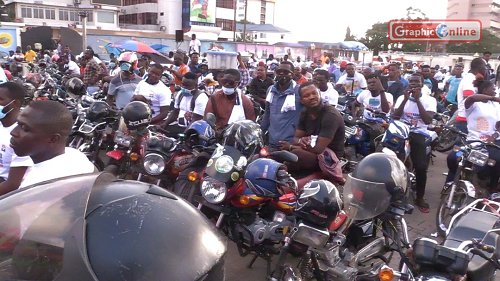 The okada riders who came for the meeting
30.5k Shares

The National Organiser of the New Patriotic Party (NPP), Sammi Awuku has advised ‘okada riders’ not to be deceived by the promise of former President John Dramani Mahama to legalise the okada business.

According to him, Mr Mahama cannot be trusted and that it was his administration that banned the operations of okada in the country in 2012.

Speaking at a meeting with the okada riders and their leadership in the Greater Accra Region on Tuesday, October 13, 2020, at the Kwame Nkrumah Circle, Mr Awuku said many of the okada riders are not doing it because that is the kind of work they wanted to do.

The government of the NPP, he said, had promised to offer the opportunity to okada riders to acquire cars and pay by installments as an alternative to the okada work.

National Organiser of the New Patriotic Party (NPP), Sammi Awuku addressing the okada riders and their leaders at the Kwame Nkrumah Circle in Accra.

He said many of the youth could also be enrolled in the various government job creation interventions such as the Planting for Food and Jobs, NABCO or the various security services, particularly those with the needed qualifications.

Mr Awuku said the NPP government unlike the Mahama-led National Democratic Congress (NDC), will not promise anything the party cannot fulfill.

The various leaders of the Okada riders associations took turns to voice out their problems, citing police harassment, issues of license and insurance as their major obstacles. They therefore appealed to the government to look into their concerns.

Responding to the appeals of the okada players, Mr Awuku pledged that the government will look into their grievances, promising that the issues of license, insurance and police harassment will be looked at.

Speaking at the event, the Secretary of the Greater Accra Okada Riders Association, David Teye debunked the allegations that okada riders have pledged their support to Mr Mahama and the NDC party because of the party’s promise to legalise the okada business.

He said the okada riders association had written to both the NPP and the NDC to have a meeting with them in order to enable them deliberate with them on issues affecting the okada business.

He said even though the Okada business had been very helpful particularly in the area of job creation to the youth, players in the industry are often harassed by the police, hence they do not have their peace of mind to operate.

Mr Teye appealed to the government to create the enabling environment for the okada business to thrive since they are only trying to fend for themselves and their families.

The Chairman for the Okada Riders Association in Greater Accra, Issah Abubakar said many of the youth are doing the okada business because of lack of job opportunities in the country.

He said if there were jobs in the country, many of the players in the okada business would not be doing it.

For his part, the President of the Greater Accra Okada Riders Association, Kabila Mohammed expressed worry over what he said was lack of respect for the okada riders by some members of the public, pointing out that many of the okada riders are graduates and deserved to be respected.

He has therefore, appealed to the government to absorb the graduates among them into the various security agencies and also honour its promise of giving cars to them to buy on hire purchase basis.