NPP must learn from history 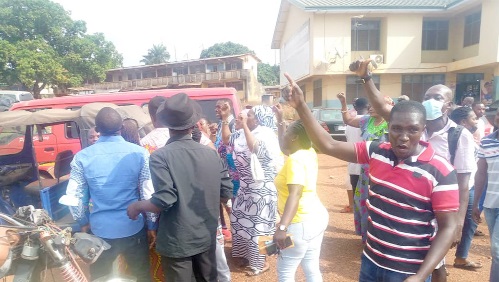 The famous saying by former President John Agyekum Kufuor that it is better to be a messenger in a ruling party than to be a General Secretary in an opposition party has significant political meaning.

Interestingly, former President Kufuor’s statement was directed at his party - the New Patriotic Party (NPP), when it was in opposition in 2009.

Now the NPP is in government and it seems it has forgotten about that statement by the former President.

The anxiety, tension and fear that has gripped the NPP in the process of electing new polling station executives, as aspirants are finding it difficult to obtain nomination forms to contest the election, is a clear testament that all is not well in the NPP.

The situation has led to clashes and disturbances in the party offices in Ningo-Prampram in the Greater Accra Region; New Juaben North and Kade in the Eastern Region; Kwadaso, Manhyia North, Asante Akim South, Atwima-Kwanwoma, Asante Mampong, Ejisu, Asante Akim North , Kwabre East in the Ashanti Region and Tolon and Nanton in the Northern Region.

In response, the party extended the closure of nominations by a day, but was it even necessary for the party to have got to a point where aspirants had to resort to violence in order to be given the opportunity to contest internal elections.

It is clear that the NPP either did not put the right structures and processes in place for the elections, or some people in the party are sidestepping those processes.

Whatever the case may be, it is not a good sign for a party seeking to “break the eight” in the 2024 elections.

Since the inception of the Fourth Republic, neither of the two dominant political parties — NPP and the National Democratic Congress (NDC) has served more than two consecutive terms in power.

Breaking the eight is, therefore, an ambitious and Herculean task by the NPP which requires focus, unity and sound political strategy.

The polling station election is the beginning of a series of internal elections by the NPP, which will include elections for constituency executives, regional officers, national officers and ultimately the flag bearer of the party for the 2024 election.

If the polling station election is causing such storms, then one wonders what will be in store for the party when it gets to the other internal elections, especially for the flag bearer.

What is happening now in the NPP could be history repeating itself depending on how the party handles it.

In 2007, the NPP found itself in a similar position. Former President Kufuor was about ending his term as a President and the party was poised to choose new national officers and a flag bearer

The party, therefore, conducted a series of internal elections to gear itself up for the 2008 general election.

It ultimately lost the 2008 elections.

Although one might attribute the party’s defeat in the 2008 election to many factors, the inability of the party to put its house in order and properly unite all the factions that emerged after the internal elections, was one of the main factors.

Following on from that defeat, the NPP went into opposition for eight years where it faced many internal squabbles, leading to the suspension of some officers, including the then National Chairman, Mr Paul Afoko, and the General Secretary, Mr Kwabena Agyei Agyepong.

The NPP must also remember the numerous battles it fought in the courtroom as a result of these internal bickerings and clashes. Those were the days the NPP was at the crossroads with infighting, counter-accusations, intimidation and violence which were the order of the day.

At that time, some Ghanaians wondered if the NPP was destroying itself even before it contested the NDC at the polls.

In fact, it was in the NPP’s own interest that it extended the close of nominations for the polling station election and also took steps to resolve the problem.

The party must do more to ensure that such occurrences do not recur or they are reduced drastically in the other internal elections.

If the party is determined to “Break the eight” it should not be having such challenges with its internal elections. Breaking the eight should not be a political mantra but it must reflect in everything the NPP does or seeks to do.