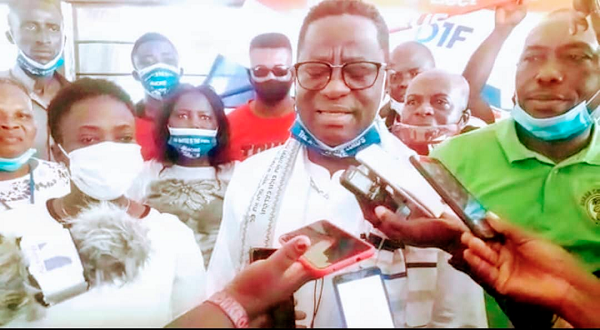 The National Democratic Congress (NDC) in the Hohoe Constituency has said it will regroup and emerge stronger to reclaim its parliamentary seat from the New Patriotic Party (NPP) in 2024.

The party said it had learnt lessons from the outcome of the parliamentary poll, which saw the NPP’s Mr John Peter Amewu polling 26,952 votes against his major contender, Prof. Margaret Kweku of the NDC, who polled 21,821.

Speaking to the Daily Graphic at Hohoe, the legal representative for the NDC in the Hohoe constituency, Mr T. K. Dzimega, said the party campaigned strongly and "he (Mr Amewu) gave us a good run for our money".

He said the outcome of the poll showed the need for the rank and file of the party to restrategise.

"One of the things we need to do is to re-invigorate our support base to touch base with everyone that matters and get more youth on our side. We are sure we will come back," he stated.

He said despite rumours of vote buying by the NPP's camp in the constituency, the overall conduct of the polls and the work output of the EC officials were impressive.

He congratulated Mr Amewu on his election as the Member of Parliament (MP).

The NPP's only seat to be won from the Volta Region drove the constituency into jubilation even before the official results were announced.

The Hohoe town was painted in a sea of red, white and blue with party paraphernalia adorned by both the youth and the old who thronged the streets.

Supporters of the party who spoke to the Daily Graphic said they were elated to have fulfilled their promise to President Nana Addo Dankwa Akufo-Addo by giving the constituency to the NPP.

The excited supporters believed that other constituencies could take a cue and follow suit in the next elections.

They indicated that the capabilities of the MP-elect showed that the area was ready for full development to take off.

The Volta Regional Women's Organiser of the NPP, Ms Afi Adzagbo, acknowledged the enormous task ahead in satisfying the development needs of the constituency, which she described as an already known terrain for the MP-elect.

She pledged to prod the MP elect to tackle issues of women's economic development.