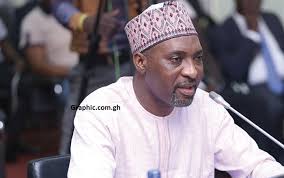 The Member of Parliament (MP) for Asawase in Kumasi, Mohammed Mubarak Muntaka has retracted his bribery allegation against a Justice of the Supreme Court.

He has also apologised for any harm done to the image and reputation of the Justices of the Supreme Court and members of the Judiciary.

This follows his allegation that a Justice of the Supreme Court tried to bribe a National Democratic Congress (NDC) Member of Parliament-elect (MP) to influence her in the election of a Speaker of Parliament.

“Based upon good counsel, I have also decided to let sleeping dogs lie and will consequently refrain from any further public commentary on the matter which, as I have indicated was originally reported to me by a female colleague Parliamentarian,” part of a press statement signed and issued by Alhaji Muntaka on Saturday [February 6, 2021] read.

In the television interview with Joy News on Sunday, January 10, 2021, Alhaji Muntaka, who is also the Chief Whip of the NDC caucus in parliament accused a Justice of the Supreme Court of attempting to induce a colleague NDC MP to vote for Prof Aaron Mike Oquaye as the Speaker of Parliament.

“Shamefully, a Supreme Court judge called a lady colleague telling her what they will give her, if she votes for Prof Mike Oquaye. He told her that, they will help her take care of her children. She can take fuel from a filling station for free for the next four years.

“So we [NDC] are going to look into it. We will look at the time he made those calls,” Mr Muntaka stated.

Following that the Chief Justice, Justice Kwasi Anin Yeboah, gave the assurance that he would ascertain the facts involved in the allegation that a Justice of the Supreme Court tried to bribe an NDC MP-elect to influence her in the election for a Speaker of Parliament.

A press statement signed by the Judicial Secretary, Justice Cynthia Pamela Addo, said the Chief Justice will seek the assistance of the person who made the allegation, the NDC MP for Asawase, Mohammed Mubarak Muntaka.

Muntaka’s accusation according to Ms Akuffo has defamed other innocent Judges of the Supreme Court who have built a reputation for themselves over the years.

This she said, “They [judges] must be very upset, if I was still there, I'd be upset. I'm not there any more but I'm still upset at the very thought that, that kind of accusation will be made."

"I don’t like accusations like that. It is like throwing a bucket of dirty water at people and you were aiming at somebody but you just threw it and it dirties up everybody.”

"You don't have to, I know of eh!, a Supreme Court..., there are, how many of them now, there are 17 people you have defamed in that casual manner but you are talking about only one person so there are 16 people who have been wrongly done by you,” Ms Akuffo said in a media interview.

Following the retraction and apology, there has been some public concerns about the usage of the expression, "Based upon good counsel, I have also decided to let sleeping dogs lie and will consequently refrain from any further public commentary on the matter which, as I have indicated was originally reported to me by a female colleague Parliamentarian."

On social media, some have argued that there was a contradiction with the retraction and apology and letting "sleeping dogs lie."

Below is a full copy of the retraction and apology

I have reflected deeply and consulted broadly on the aftermath of the disclosure I made durign an interview broadcast by Joy News TV on 10th January, 2021.

The disclosure was based on a report from a trusted colleague which was that she had been approached by a Justice of the Supreme Court seeking to entice her to vote for a particular candidate during the contest for speakership of Parliament.

Admittedly, because I did not specifically name any judge, this may have had the effect of scandalizing the judiciary in its entirety. This unintended consequence is deeply regretted.

I therefore wish to respectfully retract same and apologise for the harm done to the image and reputation of my Lord Justices of the Supreme Court and the Judiciary as a whole.

Based upon good counsel, I have also decided to let sleeping dogs lie and will consequently refrain from any further public commentary on the matter which, as I have indicated was orginally reported to me by a female colleague Parliamentarian.

I implore the media and the general public to kindly respect the spirit in which I officer this retraction and apology.

It is my fervent prayer that the existing historic cordial relations between the legislature andthe judiciary will not be affected by this incident but will continue to grow in the interest of the country.