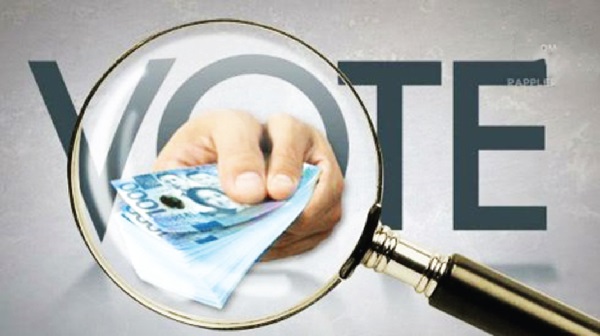 Monetisation of electoral politics has become an emerging threat to Ghana’s democracy. The emergence and the growth of the use of money to negatively influence the nation’s electoral politics and governance is undermining multiparty representative democracy in the country.

This constitutes the giving of cash or other material incentives in exchange for votes, a phenomenon known in Ghana as “moneycracy”. Political parties and election candidates have had the habit of engaging in excessive vote buying in order to get elected into office both during intra and inter-party level elections.

Since the 2004 presidential and parliamentary elections, the country has witnessed a significant rise in this negative trend and its derailing impact on the integrity of elections. During the August 2019 National Democratic Congress (NDC) parliamentary primary election, one candidate in the Madina Constituency in Accra confessed that his victory cost him GH¢300,000.

Likewise, during the NPP primaries in July 2020, there was evidence of vote-buying, with some candidates alleged to have paid as much as GH¢3,000 per delegate, as well as other gift items.

This phenomenon has unnecessarily raised the cost of contesting in elections to exorbitant levels. In a 2017 survey of parliamentarians in Ghana, the Westminster Foundation for Democracy (WFD) found that it cost approximately $87,000 or about GH¢ 500,000 to get elected to Parliament. Just recently after the December 2020 elections, the Coalition for Domestic Observers (CODEO) estimated that the cost of running for President could be as high as $100 million, while that of Parliament is estimated to be between GH¢3-4 million.

There are critical factors that appear to drive this negative phenomenon in Ghana’s electoral politics. First, the delegate system for presidential and parliamentary primaries where only few selected party members are given the right to vote contributes to monetisation. Second, the emergence of the two unregulated duopolistic parties under the Fourth Republic has become the breeding ground for large-scale vote-buying and selling and extravagant election spending. Due to this, the presidential and parliamentary tickets of the two parties are more attractive to potential election aspirants and as such are willing to spend any amount to contest on the ticket of these duopolies.

Third, political and constitutional factors have combined to entrench the practice of monetisation. For example, Article 78 of the 1992 Constitution of Ghana requires majority of Ministers to be Members of Parliament (MPs). Consequently, parliamentary aspirants often view parliamentary positions as a convenient transit point to ministerial positions and as such resort to greasing the palms of constituents to win parliamentary seats.

Fourth, the election overload faced by political parties drives monetisation in Ghana. Within the 4-year government mandate period, political parties are preoccupied with campaigning and contesting numerous elections such as those to elect branch, constituency, regional and national executives, as well as parliamentary and presidential primaries scheduled at different times. Consequently, aspiring candidates are burdened with raising money to finance the rising cost of contesting these elections.

The persistence of monetisation in electoral politics is exacerbated by the weakness of political party finance regulations in the country. The legal framework for the regulation of political parties is stipulated in Article 55 of the 1992 Constitution, the Political Party Act 574 (2000) and a party’s own constitution. However, in practice, the parties do not comply with these regulations and neither does the Electoral Commission (EC) enforce them. Moreover, there are loopholes in the current regulatory framework that facilitates non-compliance by the parties.

Other drivers of monetisation include the high levels of poverty in the country. Politicians usually target delegates who are poor for vote buying as they are more susceptible to monetary influence.

Monetisation has disastrous impact on representative democracies and accountability systems. In a representative democracy, there should be an opportunity for honest political competition based on ideas and policies to enable voters make informed choices among candidates. However, monetisation undermines the sovereign will of the voter and tilts the electoral process to give unfair advantage to well-resourced candidates. Instead of the will of the people, the power of money determines who govern the country.

Monetisation undermines democracy by promoting corruption and reducing the role of honesty and integrity in politics. Politicians who buy votes invariably recoup the amount invested in vote buying and save enough for the next vote buying at subsequent elections. Candidates that are sponsored by financiers do the bidding of their paymasters as these financiers use their influence to lobby for positions and contracts for themselves and their cronies.

Monetisation raises the cost of political campaigns to the point of excluding prospective political leaders who only have modest financial resources. It further suppresses minority parties and candidates and hinders women and other marginalised groups who do not have the financial strength to compete in monetised elections. Moreover, it leads to high attrition rate in Parliament which depletes and denies Parliament of the needed competence and experience required to function effectively. Essentially, monetisation allows incompetent people with fat wallets to be voted into power whilst flushing out existing competent people in power who do not have the financial muscle to compete.

The authors are staff of the Institute for Democratic Governance (IDEG).