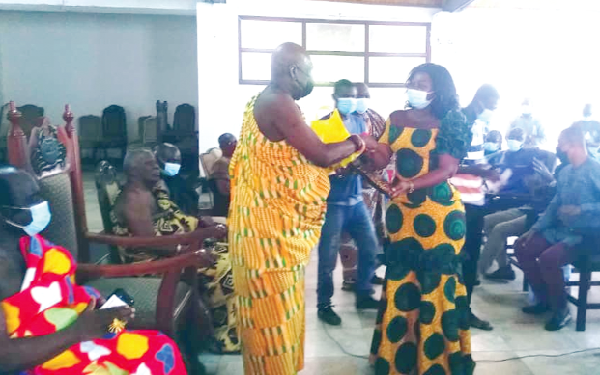 The Central Regional Minister, Mrs Justina Marigold Assan, has paid a courtesy call on the Omanhen of the Oguaa Traditional Area, Osabarima Kwesi Atta II, and the traditional council to solicit their support as she begins her tenure as minister.

The visit to the Emintsimadze Palace last Tuesday was to formally introduce herself to the traditional rulers and ask for support and collaboration during her tenure.

She was accompanied by some municipal and district chief executives and officials of the Central Regional Coordinating Council (CRCC).

In her interaction with members of the traditional council, Mrs Assan called for a collaborative effort between the traditional rulers and the CRCC to put the region on the path of progressive growth and development.

“It is a new beginning for us and I would like to plead with you to offer your support to the government to help put the region where it needs to be,” she stated.

Mrs Assan stressed the need for networking, inclusiveness and diversity of thoughts and the exchange of ideas which were paramount towards achieving a common development goal and propeling the region's growth.

“If we work in unity, we will be able to move our region forward to become the envy of many. We are partners in development, so we will begin every project with traditional rulers by consulting and collaborating with them through to its final stage,” she stated.

While welcoming the Regional Minister, Osabarima Atta II laid bare some of the region’s challenges and called for accelerated efforts to develop the region.

He observed that the region could not boast of anything significant, especially in the area of industrialisation to provide job opportunities for the youth.

“The castle, for instance, is in bad shape and we have tried engaging stakeholders but to no avail and this has really shattered us completely. The region is a household name for education and tourism and it would be prudent if stakeholders had discussions on this to give the region a spotlight,” he stated.

Citing the President’s promise of an airport in Cape Coast, Osabarima Atta II acknowledged that although it was mentioned in the budget, he was hopeful that the needed action would be taken to keep the people’s hope alive.

On behalf of the traditional rulers, the Omanhen pledged his utmost support and gave an assurance that his outfit would support the new minister.

The regional minister was presented with a shield as a sign of acceptance by the Omanhen and members of the traditional council.

The chiefs also prayed for her for a smooth journey as she takes office as the new regional minister.