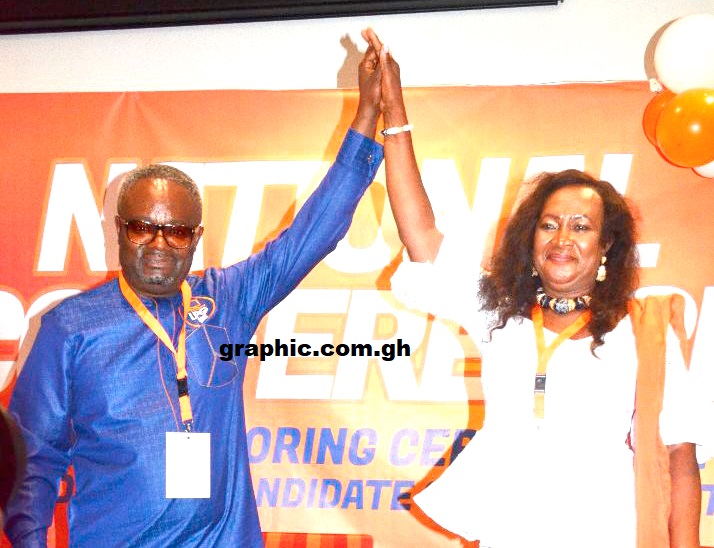 The Liberal Party of Ghana (LPG) has endorsed its Founder, Mr Kofi Akpaloo, as its presidential candidate in the upcoming general election.

In a similar fashion, it has also endorsed Mrs Margaret Obrian Sarfo, a businesswoman, as the running mate to support the party in its bid to win power in the upcoming elections.

At an event to introduce both the presidential candidate and his running mate in Accra yesterday, 13 national executives of the party were also acclaimed to aid the party to capture political power.

In an address, Mr Akpaloo commended the national council for having confidence in him by electing him to lead the party in the upcoming elections.

“I pray that your effort will not be in vain and your desire to see me become President of our dear nation will be realised. The LPG is what Ghanaians are waiting for; we have arrived on the scene to rescue them and we are not going to fail them,” he said.

Giving a blueprint of the party’s vision, he said it had a clear-cut objective of developing Ghana’s human resource to help transform the economy.

Mr Akpaloo said his strategy was to run a government that would prioritise investment in education, health care, agriculture, information technology, research and development.

He explained that his government would also put in place the needed resources, policies and incentives which would bring about the development of the educational system, from the primary, secondary through to the tertiary level.

According to him, developing people and communities was the surest and shortest way to get Ghana out of relative poverty to inclusive prosperity.

“We know this because having an extensive local and international learning and working experience, we have learnt that when human development is prioritised in society, carried along as a national agenda, the prosperity penetration increases exponentially,” he said.

He said with such agenda, the LPG, if voted into power, would ensure that the country’s tertiary institutions would be the centres of excellence where world-class research and development would take place.

Touching on agriculture, he said an LPG government would mechanise farming and bring about agricultural industrialisation to make life better for farmers and increase yields in the country.

He said such an effort would lead to more employment opportunities because farmers could earn more as a result of increased yields.

“Agro mechanised and its attended agro-allied services in the areas of agro production and industrialisation need massive interventions and support from the government. We will put in place funding and subsidy regimes to support our farmers, while discouraging importation,” he said.

He said his government would create one million entrepreneurs within four years, adding: “I have done this as a business man and I will do it as a civil servant”.

“The world has changed dynamically and the most important resource needed for transformational change, the most vital commodity, the most attractive capital, both foreign and local, are the people,” he noted.

In addition, Mr Akpaloo said Ghana would be a place where students and graduates could compete internationally for jobs and services.

For her part, Mrs Sarfo expressed her gratitude to the leader of the party for nominating her to be his running mate.

She observed that the task ahead — winning this year’s elections — was daunting but expressed optimism that it was achievable.

She, therefore, urged all the members to work harder and start winning votes for the party’s presidential and parliamentary candidates with immediate effect.

“Resources are limited, unlike the NPP and the NDC, but our determination, commitment and the judicious use of available resources will push us to victory. Let’s focus on the light at the end of the tunnel and we will certainly reach it,” she said.