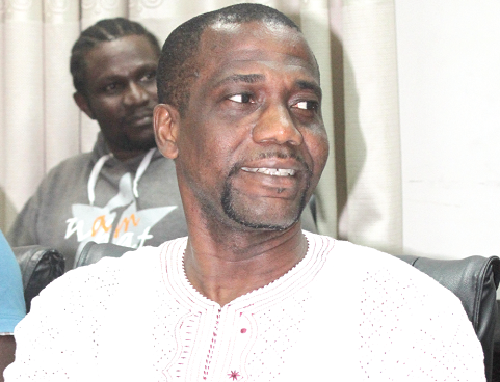 Jacob Osei Yeboah (JOY) who first ventured into Ghana's presidential race in 2012 as an independent candidate, pulled a surprise at the Electoral Commission headquarters Tuesday morning, when he announced that he is in the 2020 race as a running mate.

He introduced one Alfred Kwame Asiedu Walker as the new independent aspirant, he [JOY] will be serving as his running mate.

This came to light after the nomination papers of independent aspirant Alfred Kwame Asiedu Walker had been filed at the EC Tuesday morning.

Jacob Osei Yeboah broke the surprise to the media after the filing.

Not much is known publicly about Alfred Kwame Asiedu Walker, the independent aspirant and why Jacob Osei Yeboah has now decided to go with him as the main aspirant with JOY as the running mate.

The announcement came as a surprise to the media personnel who had gathered at the Electoral Commission to cover the filing of nomination papers.

JOY said he was not going to disclose the reasons for the new move and that the details would be made known at an outdooring ceremony which is expected to take place "soon."

Graphic Online's Kester Aburam Korankye reported from the EC headquarters that Jacob Osei Yeboah told journalists that he would rather partner Mr Alfred Kwame Asiedu Walker as a running mate to contest for the 2020 presidential election.

Mr Yeboah, who accompanied Mr Walker to submit his nomination forms to the Electoral Commission said his decision to partner Mr Walker was because they were "like-minded".

Meanwhile the President, Nana Addo Dankwa Akufo-Addo has also submitted his nomination to the Electoral Commission to contest the 2020 presidential election.

President Akufo-Addo made the submission before midday in person, and in the company of some government appointees.