I don’t know where Dr. Bawumia got his figures from – Afari-Gyan 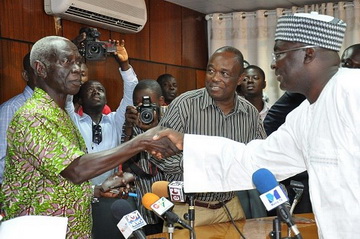 The Chairman of the Electoral Commission (EC), Dr Kwadwo Afari-Gyan Thursday told the Supreme Court that as many as 70,951 voters in the December 2012 elections were persons who suffered permanent or temporary trauma.

He defined the categories respectively as persons who had lost their fingers permanently and others who had fingers but whose fingerprints could not be read by the registration equipment but may in the future regrow their finger lines.

Such voters have the letters FO (Face Only) against their records in the register.

The figure is in sharp contrast to the 3,196 filed by petitioners Nana Addo Dankwa Akufo-Addo, 2012 presidential candidate of the New Patriotic Party (NPP); Dr Mahamudu Bawumia, running mate for Nana Addo and Jake Otanka Obetsebi, NPP chairman who are contesting the outcome and subsequent declaration of President John Mahama as the winner of the contest.

They had contended during Dr. Bawumia’s evidence-in-chief that the affected persons voted without biometric verification contrary to the rules governing the election and want the court to annul the affected ballots.

But Dr. Afari-Gyan, the sole returning officer for the presidential election, said that biometric verification for the 2012 elections did not only involve fingerprint verification.

He explained in his evidence in chief for the EC that while fingerprint verification was one of the means to verify a voter’s identity, the system also identified persons by their photographs which were captured during registration alongside other personal data collected.

Dr. Afari-Gyan said even if one was minded to consider the number of persons in the trauma categories who took part in the polls in any one region, a figure higher than what the petitioners presented would be realized.

He further explained that while the number of 70,951 trauma voters was a bit higher than the actual number that voted in the 2012 elections, the number had risen to that much following the Electoral Commission’s late registration of voters in the Kasena Nankana municipality in the Navrongo Central Constituency of the Upper East Region. That exercise yielded an additional 62 trauma persons.

A court injunction restrained the EC from registering voters in the area following disagreements over the naming of the electoral area.

He said it is therefore not correct to state that only 3,196 persons with trauma voted in the 2012 elections. He also denied claims by the petitioners that party agents were mere observers at polling stations but were part of the team entrusted with responsibility to run a credible election. He also said that no polling took place outside of Ghana in relation to the 2012 elections.

Story: Isaac Yeboah/graphic.com.gh
Writer’s email: This email address is being protected from spambots. You need JavaScript enabled to view it.