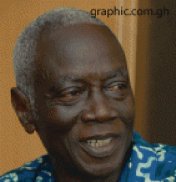 The Chairman of the Electoral Commission, Dr Kwadwo Afari-Gyan Thursday told the nine-member Supreme Court hearing the election petition that the whole mystery

According to him, only the two features made the 2012 voter registration a biometric exercise and marked it differently from previous registration exercises, otherwise all other information such as name, sex, age, residential address, hometown, names of parents whether dead or alive, etc, which were also collected during the exercise, had previously been collected.

Key advantages of the biometric registration, he said, include the fact that the registration of the voters is done quickly, data collected is more accurate and more importantly, it can identify, correct and remove multiple registrations.

Dr. Afari-Gyan said multiple registrations had been a major problem in the past, citing the example of one person who he said managed previously to vote 15 times. In other instances people moved from one region to the other and engaged in multiple registrations. In all cases the biometric registration exercise helped to stop the malpractice.

While describing the biometric registration exercise as coming to a successful end, he said challenges were anticipated for the period of registration as the over 40-day exercise spanned the entire country and involved the use of multi-component equipment. If any component, such as a camera or computer failed to work or malfunctioned, it affected the exercise, just as climatic conditions could also affect the equipment.

Again during the registration, party representatives were on hand to monitor the exercise and were issued with a daily print-out of registered voters, adding that incidentally, Ghana may be the only country that allows political parties to be part of the exercise, a feature he said he had recommended to other nations.

Dr. Afari-Gyan was in the witness box to give evidence in defence of the disputed 2012 presidential elections which is presently before the court. The petition has been filed by three members of the New Patriotic Party (NPP), namely; Nana Addo Dankwa Akufo-Addo, who was the presidential candidate of the party; Dr Mahamudu Bawumia, running mate for Nana Addo and Jake Otanka Obetsebi, NPP chairman.

They alleged a number of malpractices such as over-voting and voting without biometric registration significantly affected votes that should have brought them victory and therefore wants the court to overturn the results as declared by the Electoral Commission in favour of President John Mahama.