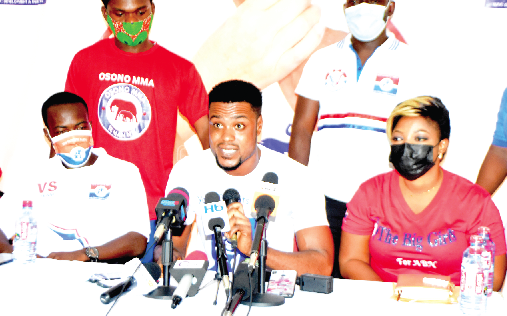 This, the group, said was due to how Mr. Ashitey performed his ministerial functions and dedicated his time and resources for the peace and development in the region.

At a press conference organised by the group in Accra yesterday, January 20, the President for the Young Patriots, Nana Yaw Baah, gave some instances that due to his effort, the region enjoyed a peaceful atmosphere between 2017 and 2020 which led to the creation of nine municipal assembly’s to fast-track development and transformation of the entire region.

In addition, he said, he solved the rampant chieftaincy disputes which were holding back the Ga-Adangme fraternity.

“The Greater Accra Region is the second most populated region after Ashanti Region with population of about 4,010,054 according to the 2010 Housing and Population census hence, accounting for 16.3 per cent of Ghana’s total population,” Nana Baah said.

“The Greater Accra is the most urbanised region in the country with about 87.4 per cent of its population living in urban centres and also houses all the arms of government. The region, therefore, needs a selfless, respectful, hard working, kind-hearted, honest and an accomplished politician who cuts across all the political circles,” he added.

Giving his proficiencies, he said Mr. Ashitey after his three-term as legislator for the Tema East Constituency between 1996 and 2008 was given the opportunity to serve as the regional chairman of the NPP from 2009 to 2013.

Under his chairmanship, Mr. Baah said he was able to increase the party’s parliamentary seats in the region from nine to 14 due to his experience.

Based on that, the President for the Young Patriots said he was given a second term as a regional chairman from 2013 to 2017 and through his tireless efforts, he was able to increase the parliamentary seats from 14 to 21 out of a total of 34 seats in the 2016 general election.

“During the 2020 general election, he advised the regional party leadership on the dangers ahead of the party in September but because he wasn’t in control of the campaign and the party, it was ignored and it is now history”.

“We are by this statement as a coalition, appealing to the President of the republic to reappoint Mr. Ishmael Ashitey as the Regional Minister so that he can continue to take care of the party volunteers’ welfare and also create job for the masses,” Nana Baah said.