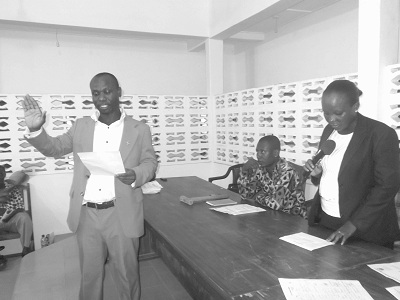 A 35-year-old Assembly member for the Gomoa Buduatta Electoral Area, Mr  Frederick Joe Arthur, has been elected and sworn in as the new Presiding Member of the Gomoa East District Assembly in the Central Region.

The election, which took place on Wednesday, was held two times before the presiding member was elected, and was supervised by officials of the Electoral Commission led by the District Electoral Officer, Mr  Moses Tia Wuni.

After the first voting, Edward Mintah had 15 votes whereas Frederick Arthur secured 25 votes. Per the composition of the 42-member assembly, a candidate should poll 28 votes to be elected as a presiding member.

After the new presiding members had been elected and introduced to the assembly members by an official of the Electoral Commission, he was sworn in by Mrs Cynthia Andy, the Magistrate at the Gomoa Dawurampong Magistrate’s Court.

In his victory speech, he particularly lauded his contender for stepping down, which paved the way for his overwhelming endorsement.

He stated that as the new Presiding Member for the district, he would be truthful at all times in the discharge of his duties that would culminate in a total transformation and development of the district.

He called on all the assembly members to put aside all their political differences now that the election was over while urging them to see the progress of the district as the responsibility of all.

He also promised to tap into the experience of his predecessor, as well as build upon what he did during his tenure.

He noted that he would ensure the strengthening of the assembly’s revenue unit so as to rake in more revenue to enable the assembly to finance some development projects.

Mr  Anthony Konbina Amoakoh, the Central Regional representative of the National Association of Local Authorities of Ghana (NALAG), advised the new PM against antagonising the DCE if there arose some misunderstandings between them, adding that the two needed to team up effectively to promote development in the district.

He cautioned the presiding member not to resort to the media to address his grievances in times of misunderstanding with the district chief executive, saying such situations could undermine the progress of the district.

He advised the PM to adopt an open door administration during his two-year tenure and be receptive to all manner of persons irrespective of their political persuasion.

Mr  Isaac Kingsley Ahunu- Armah, the District Chief Executive, in an earlier address, asked the assembly members to have the progress of the district at heart and ensure that a PM was elected to chair the affairs of the assembly.