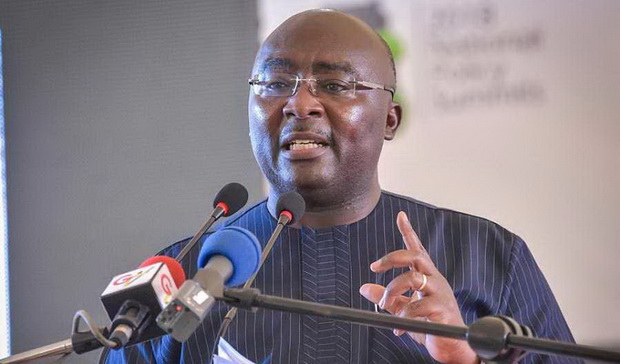 The Vice President, Dr Mahamudu Bawumia has said that the future of the country looks brighter under the current administration because the numerous social interventions initiated for the past four years are turning the fortunes of the nation around.

He says with the development witnessed across all sectors in the country, a renewal of the mandate of the ruling New Patroitic Party (NPP) in the December 7 elections would mean charting a path for more development.

Dr. Bawumia was ddressing mini rallies at separate occasions in the Chereponi and Yunyoo/Nansuan districts in the North East Region as part of a five-day tour of the region.

Suffering
Dr Bawumia said "bringing back NDC and John Mahama to power means bringing back suffering and wahala to Ghanaians."

He said the NDC could not prove themselves worthy of managing the affairs of the country when they were given the mandate, and that they can never be trusted for all the numerous promises they were making now to win votes, adding that "As we are going to the polls next week, if we vote for NDC it means that programmes such as Free Senior High School and Planting for Food and Jobs are likely to be cancelled."

New policy
The Vice President indicated that the government was initiating a new educational policy that would enable Senior High School graduates who could not afford school fees to further their education to access the loan and pay back after completion.

He noted that Chereponi and Yunyoo districts which were under the new region had received their fair share of the national cake and would witness more development when the people renewed the mandate of the president.

While appealing to the chiefs and people of the area to vote massively for the party in the upcoming polls, he also admonished them not to vote 'skirt and blouse' because it would retard the progress of the area.

National cake
On his part, the Chief of Cheri community in the Chereponi District, Baye Yaw said the people of the area had not been left out of the numerous developmental projects initiated by the government for the past four years.

"It is crystal clear that, governance is being felt at the local level under the leadership of President Nana Addo Dankwa Akufo-Addo. We say a big thank you to the president and government for creating the North East Region to accelerate development in the area as well as effectively build a prosperous Ghana for all amidst the numerous challenges the country face", he said.

He appealed for the construction of road networks in the area as well as the creation of a new district and constituency for the people of Wenchiki to accelerate development should the party retain power in 2021.