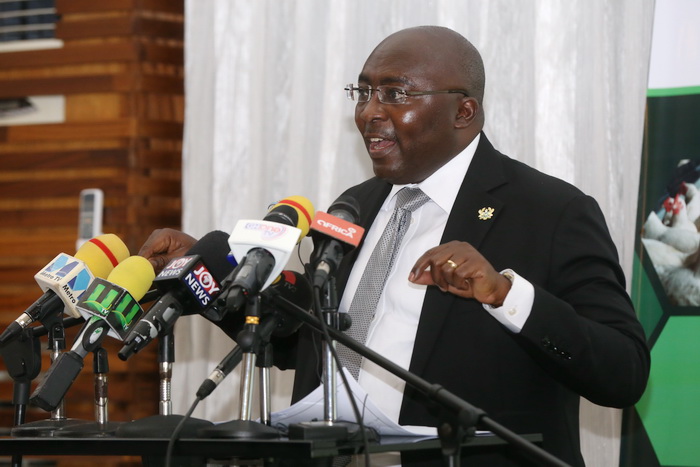 Vice President Dr. Mahamudu Bawumia has revealed that tertiary students will be able to access students loans without the need for a guarantor if the Akufo-Addo led government is given another four-year mandate in the upcoming December elections.

The beneficiaries will be given a year moratorium after NSS before they will be required to pay back the loans, he said.

He made this known during the New Patriotic Party’s manifesto launch at the University of Cape Coast in the Central Region on Saturday, August 22, 2020.

"It is very key to note that the link between tertiary education and economic development is very, very strong. Countries which have high tertiary enrollment rate, have much higher levels of economic development...One of the problems in getting access to tertiary education in Ghana is affordability...All tertiary students except teacher and nursing trainees who will be on allowances, all tertiary students will now be able to get the option to obtain a student loan without the requirement of a guarantor."

He explained that, "The current scheme asks for guarantors and you know a lot of people are not willing to put their pensions on line so the students are not able to access it. So you don't need a guarantor, all you need is your national ID card that is all."

He added that, the Nana Addo administration will also focus on improving 10,000 low-performing schools in the country.

This, he said, will be done by giving them additional funding and support the teachers so they can raise the level of performance these schools.

In addition, he said the Akufo-Addo led government will build module senior high schools in Zongo communities in the 16 regions of Ghana.

According to Dr. Bawumia, government will increase resources and infrastructure for special need education across the country. “We are going to focus on special needs, a lot of our children who are suffering from autism or cerebral palsy and other special needs, need support and government needs to support many, many organisations who are in the private sector”.

The Vice President also said that the administration will expand infrastructure to increase access to professional legal education.

“We will also complete the provision of free Wi-Fi in all Senior Secondary Schools and public tertiary institutions”, he added.

Dr Bawumia also said that the government will construct a new harbour and an airport in the Central regional capital, Cape Coast, if given another four-year mandate.

He said it is very important that the Central region gets its own airport to help with tourism and the development of the country.

“We are going to build a new harbour and a new airport in Cape Coast. It is very critical…that the Central region gets its own airport,” Dr Bawumia said.

Touching on the performance of his party so far, the Vice President said the NPP government has over 300 achievements since assuming power in 2017.

He added that that accounts for the fulfillment of 80 percent of promises made during the 2016 electioneering period.

“We have achieved 80% of all our promises and we have performed much, much better”, he said.

Manifesto: NDC has run out of ideas…you can copy us- John Boadu