Increase dialogue ahead of elections - ECOWAS President urges EC, others 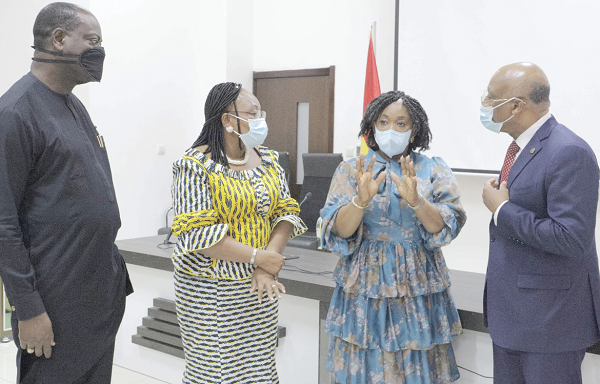 The President of the ECOWAS Commission, Dr Jean Claude Kassi Brou, has called on institutions responsible for Ghana’s December 7 polls to raise the momentum for dialogue with various stakeholders.

He said although a lot of engagements had taken place, stepping up the process would increase the level of confidence and trust, as well as reduce tension.

Dr Brou gave the advice when he led a delegation of the ECOWAS/ African Union (AU) pre- election team to interact with the Minister of Foreign Affairs and Regional Integration, Ms Shirley Ayorkor Botchwey, at the ministry in Accra last Tuesday.

The meeting was to assess the level of preparedness of the country and its institutions in ensuring a free, fair, transparent and a peaceful presidential and parliamentary elections on December 7, this year.

The team was made up of representatives from the ECOWAS and AU and it is expected to deploy about 100 observers to be led by the former President of Liberia, Mrs Ellen Johnson Sirleaf, and from South Africa, Mr Kgalema Petrus Motlanthe, throughout the country on the day of elections.

Touching on issues bordering on the electoral register, security and peace, the ECOWAS Commission president said, Ghana had credibility with respect to elections and, therefore, it expects the country to “stay at that level.”

Dr Brou used the opportunity to extend its condolences to the country on the death of former President Jerry John Rawlings and said the group had since, arriving in the country, met with various interest groups, including the ministers of National Security and the Interior, the two leading political parties, the New Patriotic Party (NPP) and the National Democratic Congress (NDC) as well as the National Peace Council.

“We have also met with the ECOWAS ambassador and some civil society organisations (CSOs),” he added.

On the electoral register, he said, the Electoral Commission (EC) had given an assurance that the process had been properly managed and would be ready for the elections.

The team, according to Dr Brou, was also concerned about peace throughout the period and said the ministers of National Security and Interior had also assured of measures instituted to ensure a violent-free and peaceful general election.

Welcoming the delegation, Ms Botchwey said the government was committed to promoting democracy, good governance, respect for human rights and rule of law, which underpinned the country’s democratic development for many years.

She expressed delight at the outstanding work done so far by ECOWAS and the AU towards the conduct of peaceful, free and fair elections in the region and for the ongoing efforts to calm tensions that arose in Guinea, Cote d’Ivoire and Mali and said the government was committed to working closely with stakeholders towards the conduct of a peaceful, free and fair elections in the country.

She expressed the hope that stakeholders in the elections would put the interest of the country above all others in order to sustain the country’s enviable image as a beacon of democracy in the region.