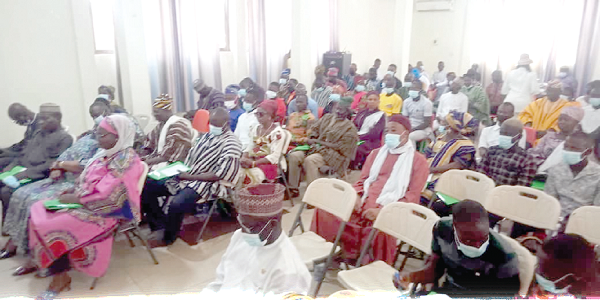 The National Association of Local Authorities Ghana (NALAG) has called on Metropolitan, Municipal and District Assemblies (MMDAs) to strategise and focus more on harnessing human, financial and natural resources through public private partnerships (PPPs) to create jobs and reduce poverty within their respective assemblies.

The General Secretary of NALAG, Mr Amankwa Kokro, who made the call, said the COVID-19 pandemic had put a lot of pressure on the finances and the service provision of the MMDAs, for which reason they must adopt new strategies to generate revenue and enhance development.

He emphasised the need for a robust approach to local economic development since national efforts would not yield the needed impact if they were not linked to the total inclusive and sustainable economic recovery at the local level.

He said this at a regional delegates conference in Tamale last Wednesday on the theme: "Transforming Local Economies for Inclusive and Sustainable Recovery".

It brought together various Metropolitan, Municipal and District Chief Executives (MMDCEs), Presiding and Assembly Members, among other stakeholders in the region, to take stock of the years under review and elect a regional representative of NALAG to the National Executive Council (NEC).

Mr Kokro expressed worry about the low participation of women in decision-making at the local level, saying the practice did not promote inclusiveness in national development.

That, he said, was a threat to the United Nations Sustainable Development Goal five (SDG 5) which mandates nations to ensure women's full and effective participation and equal opportunity for leadership at all levels of decision-making.

“Male patriarchal systems, customs, religion and social roles assignment have been used to rationalise and perpetuate these differential roles to the extent that women themselves seem to have accepted and internalised them,” he observed.

Mr Kokro, therefore, called on the government and relevant stakeholders to create the needed environment to ensure that women were evenly represented at the various levels of decision-making in the country.

For his part, the National President of NALAG, Mr Bismark Besie Nkum, bemoaned the poor conditions of service at the local level and called on the government to improve the situation to enable workers discharge their duties effectively.

He also called for more partnership with other organisations in order to address the development needs at the local level.

Mr Abubakari Ahmed Iddris, who was elected as the regional representative for NALAG, expressed gratitude to the delegates for the confidence reposed in him and pledged to work with all stakeholders in order to facilitate development at the grass-roots level.