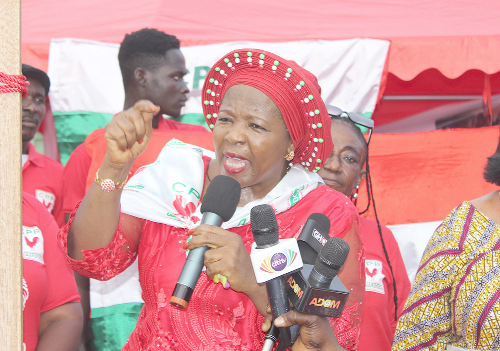 The Convention People's Party (CPP) last Sunday marked its 73rd anniversary with the launch of a mobilisation code for the recruitment of more members into the party.

The initiative dubbed "Operation Take Over", aims at mobilising over 800,000 members to fill the positions of polling station executives.

Launching the code *920*277#, the Chairperson of CPP, Nana Akosua Frimpongmaa Sarpong-Kumakumah, said the absence of polling station functionaries resulted in the poor performance of the party at those stations.

With the code, she said all one needed to do was to dial the numbers and fill in the details with their voter identification card numbers to become a member of the party.

Nana Sarpong-Kumakumah told the youth that nothing happened until they moved, adding that "nobody is going to create any magic for you. I believe in the Ghanaian youth who are so much endowed with knowledge".

She said every single youth was endowed with the Osagyefo spirit and something to contribute to the development of the country.

"And today we are here to rekindle that spirit," she emphasised.

The Director of Communications of the CPP, Sylvester Soprano, said the party was following the footsteps of Dr Kwame Nkrumah at Arena to launch the mobilisation code for the rejuvenation and resuscitation of the party.

According to him, the party was determined to break the dominance of the New Patriotic Party (NPP) and National Democratic Congress (NDC).

He said the party was bringing Ghanaians hope so they could live dignified lives.

The Director of Elections of the party, Habib Yakubu, said voting for the CPP did not amount to the wasting of votes but to stand with it for the betterment of their lives.