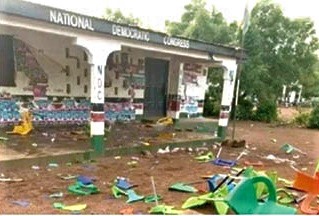 The vandalised office of NDC in Techiman Follow @Graphicgh

The Techiman Circuit Court has granted bail to four persons accused of damaging the regional offices of the National Democratic Congress (NDC) in Techiman last Friday.

The four are Illiasu Sulemana aka Oboot, Andrew Kemire, Fatau Abdallah and a suspended NDC Chairman of the Techiman South Constituency, Alhaji Nuhu.

However, the court, presided over by Malcolm Ewoenam Bedzra, declined bail to the fifth accused person, Kojo Agyei, alias Kojo Cocaine, who is alleged to have slashed one person with a knife.

The Bono East Regional Police Command arrested the five accused persons for their alleged involvement in the attack of the Bono East NDC Regional office at Techiman on July 28, 2022.

Alhaji Nuhu’s case was, however, held differently, as the police accused him of instructing 12 people to cause damage to the office.
On Sunday July 31, 2022, the regional police command issued a press release signed by its Public Relations Officer, Assistant Superintendent of Police (ASP) Amponsa Bosie Dankwa, that explained that one person sustained multiple knife wounds during the attack.

It said the injured was rushed to the Techiman Holy Family Hospital, where he was undergoing treatment.

It explained that the party office had its sliding windows and a vehicle which was parked at the office vandalised.

The release urged individuals and groups to choose dialogue over violence to resolve their differences, since the police would not hesitate to apply the law.