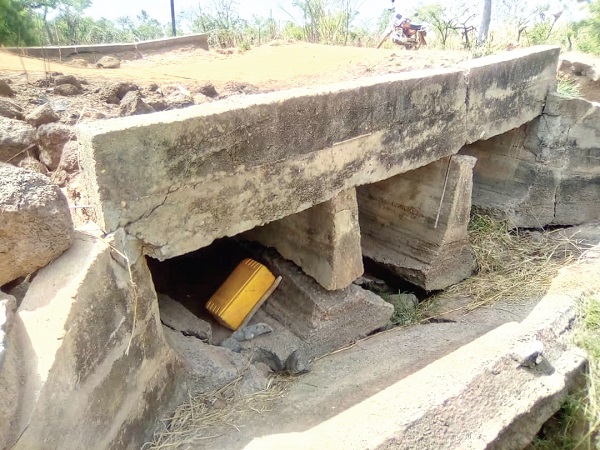 The New Patriotic Party (NPP) Member of Parliament (MP) for Zabzugu in the Northern Region, Mr John Jabaah Bennam, has appealed to the Ministry of Roads and Highways to fix two broken down culverts on the Nakpali- Maa-Finaayili-Chichali road in his constituency before the rains set in.

That, he said, would facilitate the movement of goods and people to marketing centres and to also enable school children to go to school during the rainy season.

According to him, the two culverts that linked the Nakpali road through Maa to Finaayili to Chichali collapsed between August and September in 2021, following the heavy rains last year in the northern parts of the country.

He said those rains cut off Maa, Finaayili and Chichali communities thereby affecting the movement of residents during that period, especially market women and schoolchildren who could not cross the flood water to go to the market and school at Nakpali.

"My constituents would, therefore, be happy to see the two culverts fixed before the raining season," he said.

Mr Bennam made the appeal in an interview with the Daily Graphic at Parliament House last Friday, after he asked a question on the floor of Parliament of the Minister of Roads and Highways as to when the road from Nakpali through Maa, Finaayili to Chichali would be reshaped and gravelled.

He said his concern was not about the reshaping and gravelling of the road but the fixing of the two culverts that had broken down to ensure the smooth movement of goods and people to and from the three affected communities.

"Those who risk to cross had the flood waters at their waist level while schoolchildren who trek to school from the three communities to Nakpali could not go to school," he stated.

The Minister of Roads and Highways, Mr Kwasi Amoako-Attah, who was in the House to answer questions, said the appeal made by the MP for the two culverts to be fixed before the rainy season would be considered.

He said it would be added to the scheduled road maintenance of the ministry to ensure that they were fixed to provide smooth and safe movement of goods and people to and from the area.

He gave an assurance that the reshaping and gravelling of the entire road would be factored into the 2023 budget.

Mr Bennam thanked the minister for his response and pledged to follow up at the ministry to ensure that the two broken down culverts were fixed before the rains begin in August, this year in the north.