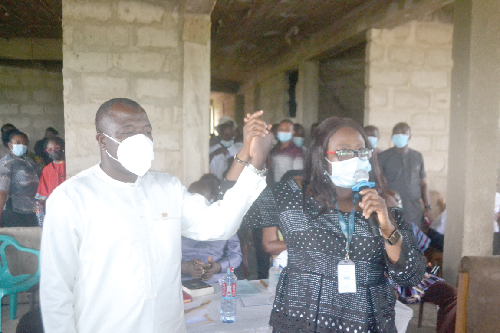 A-43-year-old businessman, Alhaji Zubairu Kassim, has been given an overwhelming endorsement to become the new Municipal Chief Executive for the Effutu Municipal Assembly in the Central Region.

In an election conducted by the Electoral Commission (EC), led by the District Electoral Officer, Madam Emelia Ama Akotia, the nominee secured the votes of all the 25 assembly members.

Alhaji Kassim, who was subsequently sworn into office by the Winneba District Court judge, Mr Isaac Oheneba-Kuffuor, replaces Mr John B. Ninson, the immediate past MCE for the area who was not re-appointed by President Nana Addo Dankwa Akufo-Addo.

The Central Regional Minister, Mrs Justina Marigold Assan, said she had been encouraged by the confirmation of the chief executives for Gomoa West and Effutu in the region.

She noted that the enthusiasm among the assembly members was ample testimony that they were ready to assist the new MCE to improve the living conditions of the people.

She charged the assembly members in the remaining MMDAs to learn from the pace set by their colleagues in Gomoa West and Effutu and confirm their respective MMDCEs since there was work to be done.

In his victory address, Alhaji Kassim thanked President Akufo-Addo and the Member of Parliament (MP) for the area, Mr Alexander Afenyo Markin, for giving him the opportunity to serve the people.

“Together with assembly members, chiefs, members of the clergy and all other key stakeholders, we will work to make the municipality a better place for all,” Alhaji Kassim said.

For his part, the immediate MCE, Mr Ninson, pledged to offer the needed assistance to the new MCE so that they could put their heads together to champion the development of the area.