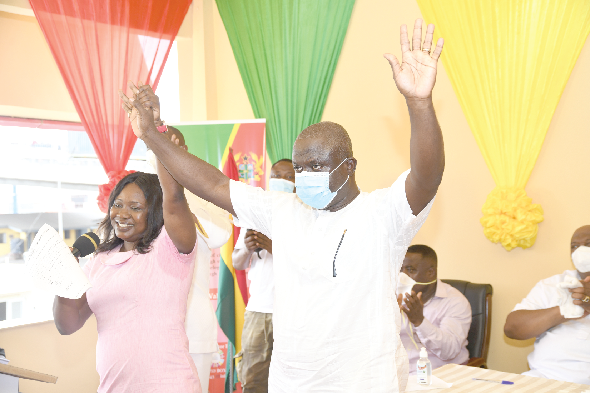 The confirmation or rejection of chief executive nominees for metropolitan, municipal and district assemblies (MMDAs) in the Greater Accra Region began yesterday.

Assembly members in the Ayawaso Central, Korle Klottey and Ablekuma West municipalities unanimously endorsed the nominees for the assemblies.

The venues where the voting took place were thrown into a frenzy after all the nominees managed to garner 100 per cent votes  after the voting, which was supervised by officials from the Electoral Commission (EC).

The Greater Accra Regional Minister, Henry Quartey, as well as officials of the governing New Patriotic Party (NPP), was on hand to support the exercise.

The exercise was in line with Article 243 (1) of the 1992 Constitution and Section 20(1) of the Local Governance Act 2016, (Act 936) which stipulates that all MMDCEs should be appointed by the President and approved by not less than two-thirds majority of assembly members.

In separate addresses, the regional minister asked the MCEs to work assiduously to rid their jurisdictions of indiscipline.

He said the mandate of the assemblies was to ensure that residents had access to much-needed services and enhance development.

Mr Quartey, who is also the NPP Member of Parliament (MP) for Ayawaso Central, urged the MCEs to act urgently in confronting the challenges in their respective jurisdictions.

“Put your men on the ground and work and deal with indiscipline that is gradually engulfing the region,” he added.

To ensure similar results in all the assemblies and promote collaboration, he urged all MPs to support the exercise.

Mr Quaye was thankful to the President for the opportunity and pledged to work with all members of the assembly to bring development to the municipality.

To achieve this, he noted that he would introduce reforms to improve revenue mobilisation and ensure transparency and accountability in the execution of plans to resolve challenges impeding the growth of the municipality.

“I ask for cooperation from all of you. The task ahead is all inclusive and we can’t leave anyone out. I also humbly appeal to you to draw my attention to any issues that will advance the cause of the municipality,” Mr Quaye added.

For his part, Mr Tawiah noted the assembly’s commitment to undertake various development projects, including the Osu Fish Market, the Odawna Market, among others.