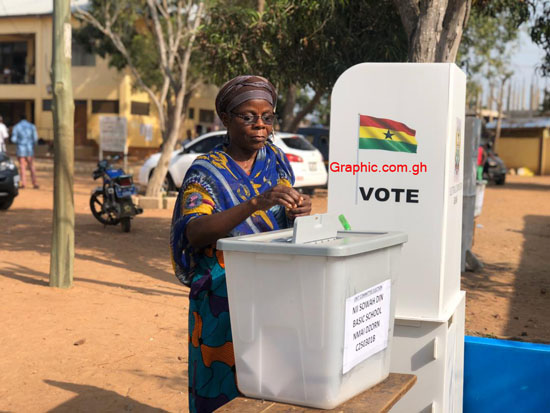 Voting in Tuesday's district-level elections across Ghana where a total of 57,030 candidates are jostled for seats in either the assemblies or the unit committees witnessed a low enthusiasm.

With the exception of Nkoranza North, Nkoranza South and Lower Manya Krobo where there was no election, all other districts voted on Tuesday.

There were however pockets of incidents in some electoral areas and polling stations to interrupt the voting process.

The elections took off smoothly across the country.

The President, Vice, and some dignitaries cast their votes early in the morning.

The usual long queues and eagerness to vote which characterises the general election was absent as voters trickled in to cast their ballots in many areas.

In two communities in the Central and Western North regions, some people boycotted the civic responsibility to vote.

The people of Ekumfi Immuna in the Ekumfi District of the Central regions boycotted the elections in a protest against bad roads.

This was also the same situation in Aowin, where some youth boycotted the election for lack of good roads.

Graphic Online reporters from across Ghana visited various polling stations and filed various reports indicating that there was low interest in the elections.

There were no queues at many of the polling stations visited.

From Adabraka [PICTURED BELOW] in the Korle Klottey Municipality in Accra, Enoch Darfah Frimpong reported that only 79 people voted out of the 701 on the voters register as of the close of the voting at 5 pm at the Church of the Lord Brotherhood polling station. At that particular polling station, there were two contestants in the assembly elections with Frederick Quansah securing 49 votes against Kwaku Kwarteng Frimpong's 30 votes. 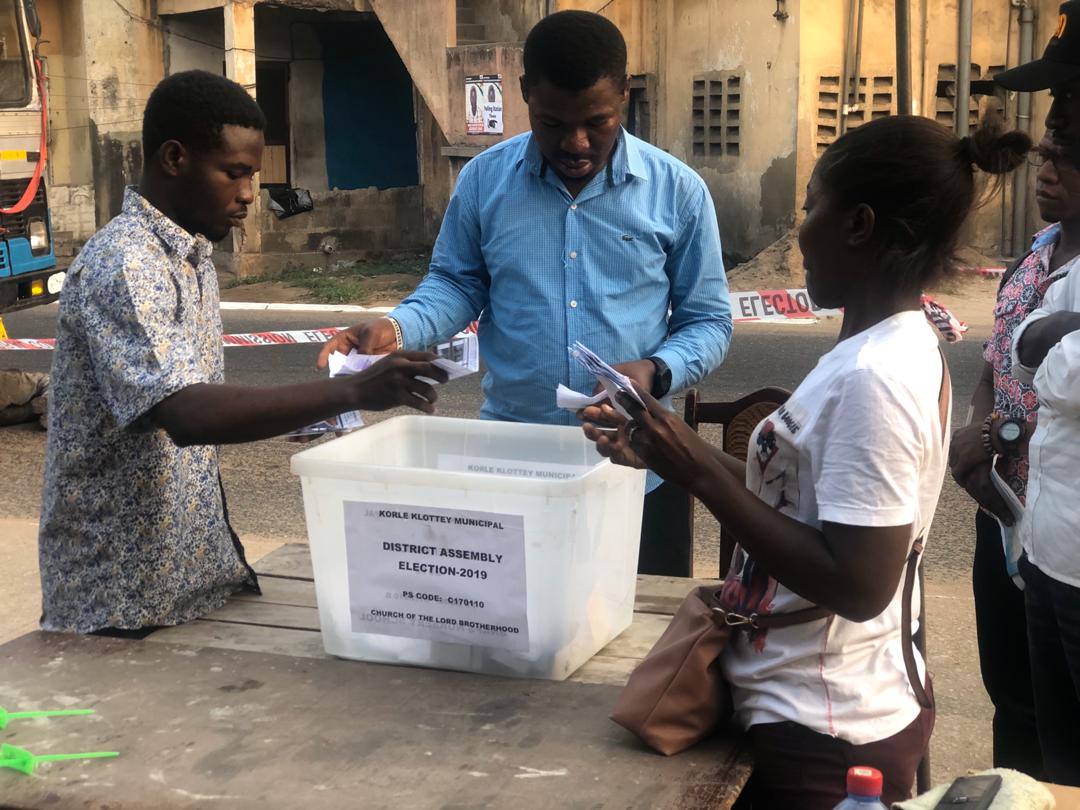 From Ashale Botwe School junction in the Adentan Constituency in Greater Accra, Enoch Darfah Frimpong reported that as of 9am, 29 people out of a total 781 people in the register had voted at the Nii Sowah Din polling station B at Nmai Dzorn.

At the Nii Sowah Din polling station A at the same Nmai Dzorn cluster of schools, 15 out of 354 on the register had voted as of 8:50am.

The presiding officer at the Nii Sowah Din polling station B, Asare Francis Dankwa told Graphic Online the process was moved smoothly and that the station did not face any difficulties, except that voters were trickled in. 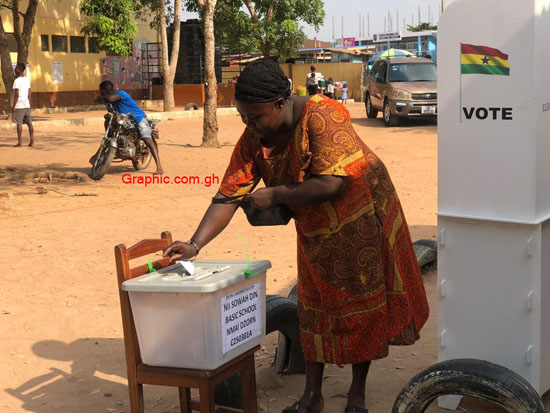 At Kyebi in the Eastern Region where President Nana Addo Dankwa Akufo-Addo and his wife Rebecca voted, the president urged the public to turn up in their numbers to vote.

Salome Appiah-Adjei reports from Ayawaso also in Greater Accra that In spite of the campaign by the Electoral Commission and civil sociëty groups to whip up interest in the elections, there was still low turn out at some polling stations as of 11:30 am.

At some polling stations at the Ayawaso West Wuogon, the centres were virtually empty with no one around to cast the vote at the time of the visit around 9 am.

At the Clinic A and B centres, Graphic Online waited for about 15 minutes to see if anyone will come and vote but no one came.

The presiding officer, Mr David Odjeawo said a total of 749 registered voters were on the roll but only 14 had voted as of 9:am.

“The turnout, as usual, is very low but we are hoping it will build up getting to the evening,” he said.

The situation was not too different at the Westland Garden Junction A and B centres also in Ayawaso in Greater Accra. About three people were around to cast their vote at the time of the visit. 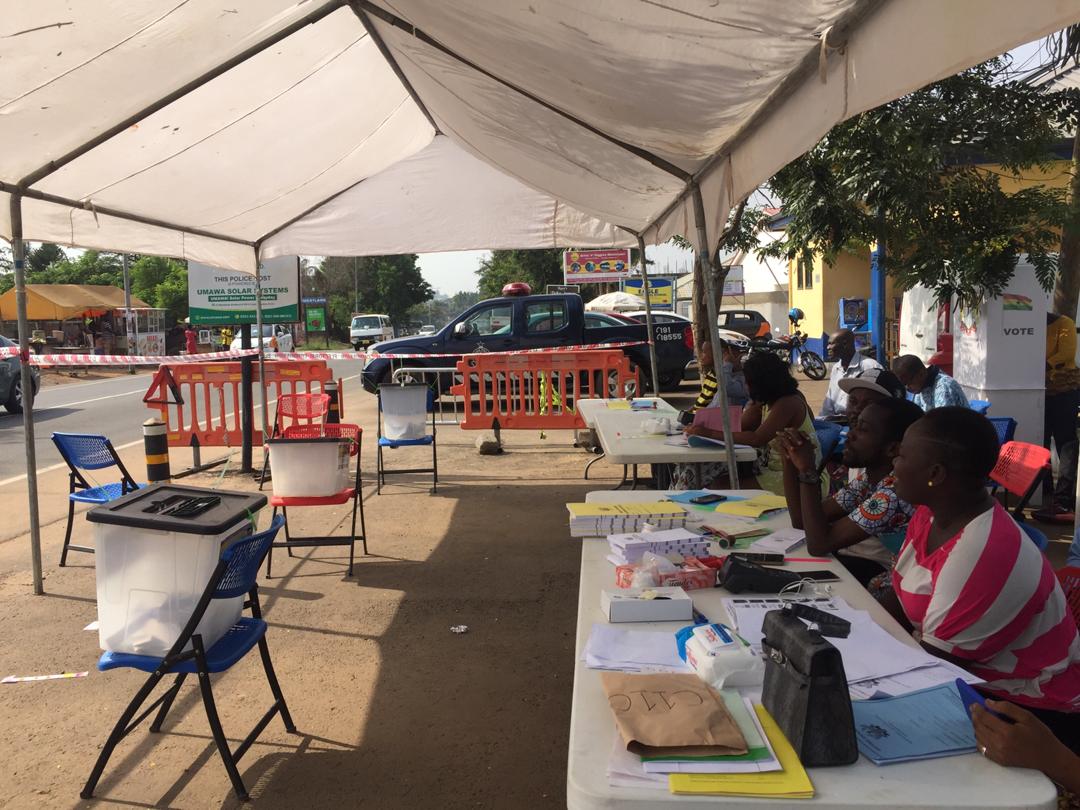 PHOTO: At the Clinic junction electoral area at the Ayawaso West Wuogon Consitutency, the centre was virtually empty with no one around to cast the vote at the time of the visit around 9 am. PICTURE BY SALOME APPIAH-ADJEI

At the Salaga Market, Graphic Online gathers that there was a stabbing incident following a disagreement with some supporters of the contesting candidates.

The victim, who was reportedly stabbed with a key, was rushed to the hospital.

The police patrol team arrived on the scene to control the situation but the alleged perpetrators fled the scene.

Della Russel Ocloo reported that voting in the Tema West Constituency was slow.

Only five people out of 537 had voted at the New Lashibi TMA Primary school at Community 18 near Tema as of the time of the visit at 8 am.

The Presiding Officer, Emma Roberta Ashittey told Graphic Online that although turnout doesn't look encouraging, they were hoping residents within the electoral area will exercise their franchise before the close of voting day.

In fulfilment of his civic responsibilities, the Vice President, Dr Mahamudu Bawumia was among the first to vote, at 7:26 am, at the Kperiga D/A School polling station in Walewale.

In a brief remark, Dr Bawumia urged Ghanaians to come out in their numbers to vote, pointing out that national development begins at the local level. 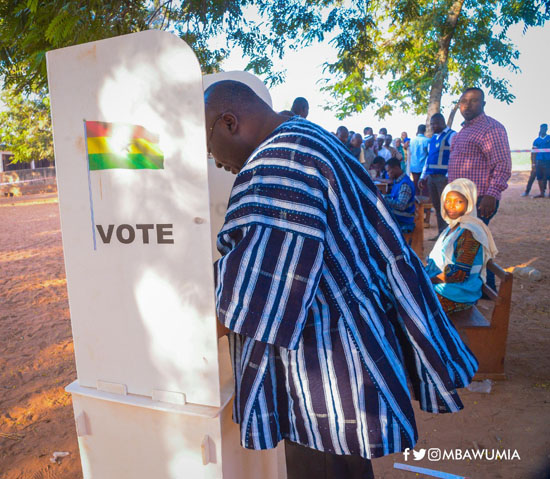 From Tema Manhean, Benjamin Xornam Glover reported that there was heavy security presence in the Homomo Electoral Area in the Tema East Constituency where three candidates are vying for the assembly member slot, while 12 candidates are aspiring to become unit committee members.

The high presence of security personnel is due to the intensity of the pre-election campaign between two candidates, the incumbent Mr Christian Y. Amoah and his close contender Enoch Afutu which occasionally resulted in street fights, a situation that forced the Tema Metropolitan Security Committee (MUSEC) to declare the area a flashpoint.

As of 8:30 am, 200 out of the over 11,000 eligible registered voters had cast their vote at the Methodist Day primary and JHS polling station.

In October this year, a 19-year-old man suffered multiple machete wounds after he was attacked for allegedly ripping off the campaign posters of a rival candidate in the Homowo Electoral Area.

The victim, Benjamin Dika, a factory hand, said to be a sympathiser of the incumbent assemblyman for the area was taken to hospital after he was reportedly attacked by a supporter of a rival assembly member aspirant, with a machete.

The victim was treated and the case was reported to the police. Since then, the MUSEC said they have adopted to deal with the security situation in the area, before and after the elections.

At the Moshie Zongo Electoral Area in the Tamale Metropolis, the Electoral Commission postponed the elections because the candidates complained that their positions on the ballot paper had been swapped contrary to what they were aware of and had used in their campaign to guide their supporters to vote for them.

The Northern Regional Director of the EC, Mr Lucas Yiryel confirmed the postponement and said the printing house had been informed to print new ballot papers and that the election will be organised when the ballot papers were ready.

From Bolgatanga in the Upper East Region, Vincent Amenuveve reported that a total of 695,189 eligible voters were expected to vote in the entire region.

Out of that number, 25 Persons With Disabilities (PWDs) were contesting.

At the Upper East Regional House of Chiefs polling centre only 21 people had voted out of the 633 eligible voters as of 8:42 am.

At the Bukere Primary A polling centre however, voting started at 7:40 am due to challenges with the Biometric verification machine.

Another challenge was that most eligible voters forgot to bring along their voter identity cards.

Mr Emmanuel Adongo, an agent for David Atinga one of the aspirants who is vying for an assembly member for the Bukere Electoral Area expressed satisfaction about the exercise.

At the Bukere Primary B polling centre there was however no queue as 39 people had voted as of 9:13 am.

From Ho, Emmanuel Modey, reports that voting at the Dora Memorial School Complex A and B Station in the Ho-Have Electoral Area, started as scheduled.

Speaking to the Presiding Officer, Mr Wonder Ahiale, he said every logistics had been provided to ensure a smooth and successful exercise. He was hopeful that more voters will come during the cause of the day.

Shirley Asiedu-Addo, reported that the people of Ekumfi Immuna in the Ekumfi District of the Central region boycotted the elections in a protest against bad roads.

The people of Immuna had sent letters to the Electoral Commission, the Ekumfi District Assembly and the police to that effect.

The District Electoral Director for Ekumfi, Mr Samuel Ocran Aikins speaking in a radio interview said the police has advised the EC to hold on with elections in the area.

Speaking on issue Mr Abraham Armah Vifah, a youth leader in the community said the road from Esuehyia to Immuna is in a deplorable state.

He said there have been two demonstrations and petitions to the district assembly seeking attention for the road.

He said they sent a petition signed by the youth to the police and the district assembly.

"We pay taxes and do our civic responsibilities and it is only fair that when we elect leaders they also listen and undertake the projects that will make our lives better," he said.

"We heard nothing from the district assembly. They thought we are joking. We want to tell them we are not joking. We will not vote in the 2020 elections too if the road is not done."

Meanwhile, voting is ongoing smoothly in various electoral areas in the Central Region.

Emmanuel Adu-Gyamerah reported that voting in the Sunyani Municipality was very slow with a few people patronising the exercise.

At the Holy Child Academy in the Magazine Electoral Area, only 67 out of the 766 eligible voters had cast their votes as of 10.40 am.

The story at the Akwakora Kwadwo Electoral Area was not different as all the three polling stations at the Nyamaa JHS visited had not recorded appreciable numbers as of 11 am.

The Presiding Officer at the Holy Child Academy Polling Station, Mr Samuel Antwi expressed the hope that the station would record an appreciable number of voters by the end of the exercise.

Some of the voters interviewed called on the government to declare a public holiday during such national exercise to entice more people to exercise their franchise.

From Kumasi Kwadwo Baffoe Donkor reported that the elections has been met with the usual apathy that has characterised the election to elect assembly members to the various district assemblies.

A visit to some selected polling stations within the Subin constituency in Kumasi revealed a very low turnout of voters.

At the AME JHS Lower Polling station, the situation was not different.

Only 60 voters out of the 560 registered, had cast their ballot as of midday.

And it was virtually the same thing at the AME JHS Lower A Polling station where as of 11:54 am, 84 voters out of the 790 registered had turnout to vote.

All the polling stations were virtually empty with most of the staff idling.

A few of them that Graphic Online spoke to, said they would cast their vote later after registering for the Ghana Card.

They claimed that since the Ghana Card registration has a deadline and a golden opportunity for them to have the card, they would not let it slip by.

“As for the assembly members they are always here with us. We vote for them but do not see what they are doing for us. Let me also think about myself” one lady said.

As of 1:30 pm, there were no voters at the police station, leaving the election officials to keep themselves busy with their mobile phones or engage in conversations among themselves.

In an interview, the presiding officer of the Adenta Barrier Polling Station A, Mr Kofi Asamaoh said 44 voters out of the expected 851 had cast their vote as of 1:30 pm.

At the Adenta Barrier police station B which was on the same premises, 43 voters had cast their vote out of the expected 811 voters by 1:30 pm.