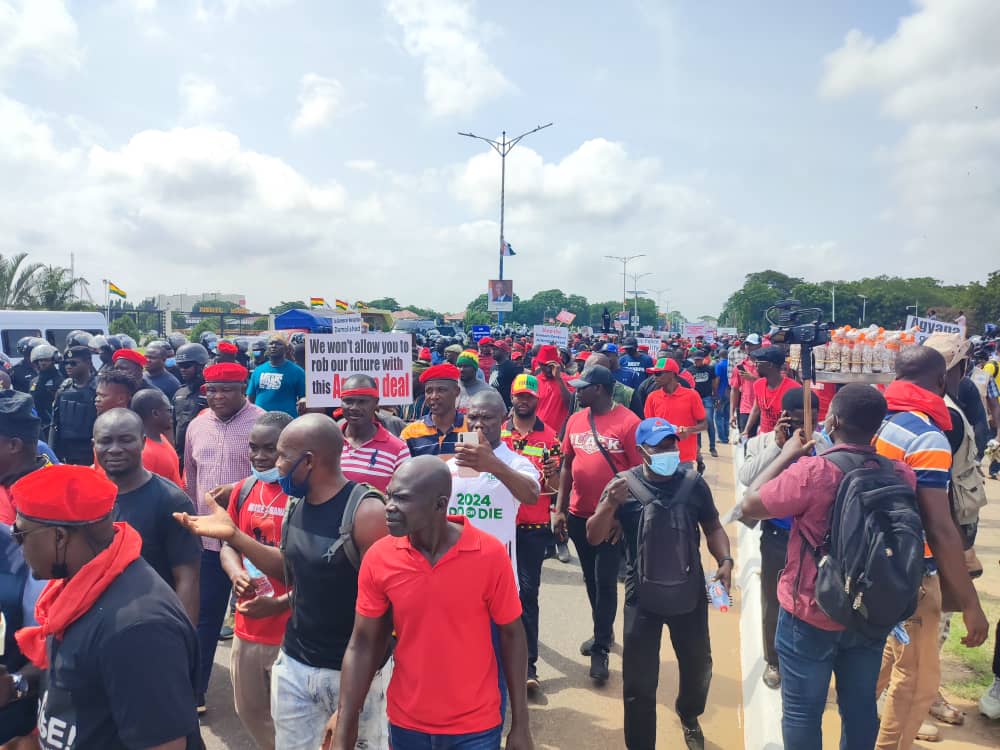 The second day of Arise Ghana's street protest in Accra over fuel price hikes, tax on electronic payments and worsening economic conditions was incident-free compared to the first day of the protest on Monday.

Unlike the first day of the protest, which ended prematurely with members of the Arise Ghana Group clashing with Police at the Kwame Nkrumah Interchange, Tuesday's protest was largely incident-free.

The protestors and Police began massing up outside the El-Wak Stadium in Accra as early as 6am for the protest.

The protestors carrying placards and singing along to reggae music then started marching leisurely from the El Walk Stadium past the Lands Commission, Ghana Post Office, WAEC, Department of Parks and Gardens, Christ the King Church and made a brief stop across the road from the Jubilee House where they were met by a wall of police officers in riot gear.

Despite, the heightened tension at that point, the protestors made their way towards the Sankara Interchange and marched towards the Ecobank Head Office to the Ministries area.

Present at the protest ground and the march were the North Tongu Member of Parliament (MP), Samuel Okudzeto Ablakwa, Sammy Gyamfi, Bernard Mornah and Edem Agbana.

The leadership of the Arise Ghana group presented a petition to the government, which was received by two deputy ministers at the Finance Ministry and the leadership of Parliament at the end of the march.

Twelve police officers and dozens of protestors were injured on the first day of the protest after the protestors and the police traded stones, teargas and hot water canons.

Twenty-nine demonstrators were also arrested for alleged violent attacks on the Police and the public as well as destroying public property.