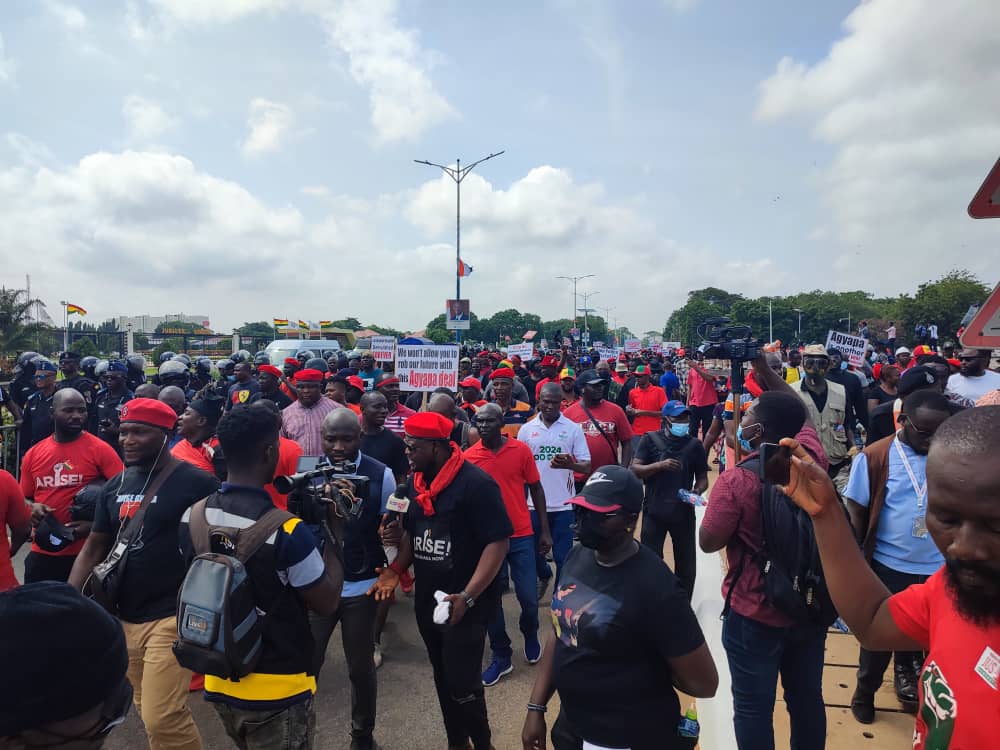 Political pressure group, Arise Ghana has presented a petition to the Ministry of Finance demanding that the government takes "pragmatic steps to alleviate the suffering of the people of Ghana".

The group says it wants the government to cancel the Electronic Transaction Levy (E-levy) immediately and also take steps to reduce inflation and arrest the depreciation of the cedi to help bring relief to the Ghanaian people.

The group is also urging the government to take urgent steps to remove levies and taxes which it says have led to skyrocketing fuel prices and high cost of food.

"We call on the Ministry of Finance to scrap the E-Levy that is imposing more hardship on the people of Ghana and siphoning their capital and above all confiscating our savings," a leading member of the group, Bernard Mornah said before presenting the petition to two deputy ministers of Finance, John Kumah and Abena Osei Asare on Tuesday.

"The ministry should take urgent steps to ensure that inflation is brought down to the barest minimum to allow the poor with little income to afford basic commodities," they added.

The group also wants the government to desist from reintroducing the Agyapa deal in parliament and reduce unemployment among the youth.

Mr Mornah said although the petition was addressed to the Speaker of Parliament, the Finance Ministry was best placed to deal with its concerns.

After receiving the petition, a Deputy Minister of Finance, Abena Osei Asare assured us that the government was already taking steps to bring economic relief to Ghanaians and had already met relevant stakeholders on the issues.

She said the economic hardship Ghanaians were going through was caused by the COVID-19 pandemic and the Russia-Ukraine war.

She also expressed gratitude to the protestors and the security services for ensuring an incident-free demonstration on Tuesday.

The protestors marched to Parliament House to present another copy of the petition to the Speaker of Parliament, Alban Bagbin.

At the Parliament House in Accra, the petition was received on behalf of the Speaker of Parliament by the Majority leader, Osei Kyei-Mensah-Bonsu and the Minority Leader, Haruna Iddrisu.

Mr Iddrisu said Parliament would take note of the contents of the petition and address them.

He also commended the protestors and security personnel for safeguarding a peaceful protest.

Mr Kyei-Mensah-Bonsu said: “We have noted the concerns that you raised including matters relating to taxes, and reclassification of the Achimota forests, unemployment and inflation.”

He urged the protestors to demonstrate peacefully, adding that the petition would be considered and addressed appropriately.